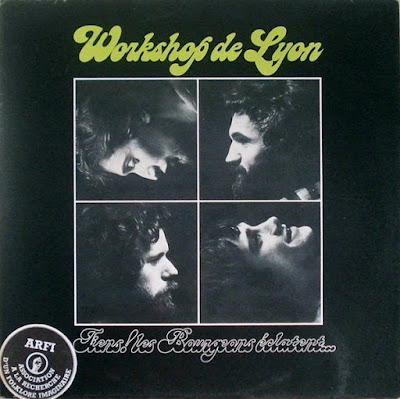 The collective methodology of the Workshop de Lyon led to the creation of the ARFI (Association Searching for an Imaginary Folklore) in 1977, their aims were very much a mission statement "encourage improvisation, spread diverse musical styles and provide means of expression to others with similar ideas, establish a folklore…"
Their reference was the A.A.C.M. (Association for the Advancement of Creative Musicians) created twelve years previously with the similar idea of providing material assistance to and defending the interests of creative musicians, to encourage the emergence of new music. The open-structured ARFI self-produced their music thanks to their own label, on which almost all of the albums of the Workshop de Lyon appeared, from Concert Lave onwards.

Their third album, Tiens ! Les bougeons éclatent… is a perfect example of how the group sounded when it was released in 1978, about a year after the studio recording. Pianist Patrick Vollat had left but was still very much a part of ARFI (in particular as part of the excellent Marmite Infernale), so the Workshop de Lyon stabilized to a quartet of Louis Sclavis, Maurice Merle, Jean Bolcato and Christian Rollet, and already had at the time an unparalleled repertoire. This never ceased to expand, through the meetings and personnel changes, while losing nothing of its generosity nor showing any signs of ageing. This proffers on the Workshop de Lyon a certain universal dignity which honours their original models, Albert Ayler or the Art Ensemble of Chicago to name but two, transfiguring them into a new, exciting aesthetic approach bursting with openings and exchanges. Irresistible!
Posted by Zen Archer at 11:03:00 PM 1 comment: 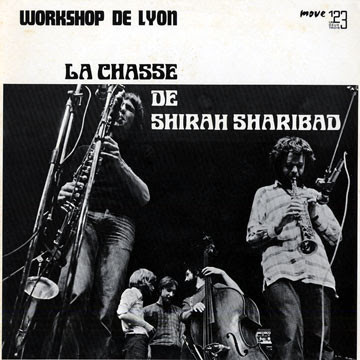 
A fantastic record by a little-known French group of the 70s – a quintet that grew out of the Free Jazz Workshop in Lyon, and which featured a relatively similar lineup – but with the inclusion of a young Louis Sclavis on soprano sax and bass clarinet! We know (and love) the Sclavis recordings from the 80s, but this is perhaps the earliest we've heard him perform – and his sensitivity is a perfect match for the freewheeling energy of the rest of the group

In France, in the years 1960-1970, musicians pondered over how to transpose the political struggle of free jazz onto a completely different political terrain. One of the first to do so was pianist François Tusques (agitator, theorist and militant) who recorded Free Jazz, and then continued with Le Nouveau Jazz, French equivalents to the American New Thing. The word spread, and was picked up by the Free Jazz Workshop which became the Workshop de Lyon in 1975 with the arrival of clarinetist-saxophonist Louis Sclavis.

Still a source of joy, this lyrically feverish second album maintains a narrative dimension however subtle the textures developed through the contrasting collective improvisations. With their ever-inventive melodicism, the Workshop de Lyon invent an imaginary folklore on this album which is unlike any other. It is a knowing mix of the avant-garde and the traditional, collective playing vying, with panache and complexity, with the inspired urgency of the soloists. Even without filmed images the theatricality and humour of the group's live performances, essential components of their identity, can be felt during the long thematic suites which are both expressive and full of joy.

What better way to honour their imaginary mentors, Albert Ayler or the Art Ensemble of Chicago! More, More! 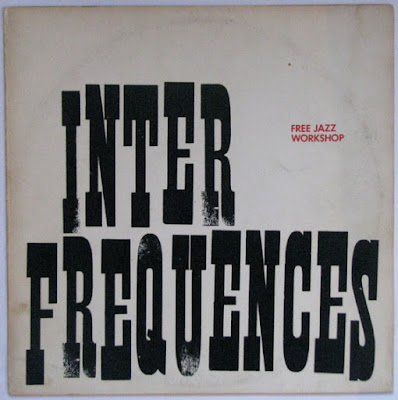 
The Free Jazz Workshop came into being in 1967 but their first album, Inter Fréquences, only appeared in 1973. Unfortunately there is no recorded trace of the group including the first drummer Pierre Guyon before he was replaced by Christian Rollet in 1970.

One of the slogans doing the rounds at the time sets the tone: "Aesthetic liberation is but a prelude to the liberation of humanity." The trajectory of the Free Jazz Workshop (which became the Workshop de Lyon in 1975 with the arrival of clarinetist-saxophonist Louis Sclavis) is emblematic of the emancipation of the mindset of certain French musicians during this period. It has been an exceptionally long-lived trajectory a "half-century" as the members say, during which the group - in Christian Rollet's own words – went from being "an exploratory workshop who claimed to take no account of the musical certitudes of the majority" to becoming something of a classic institution.

Right from this first album it is clear that the group would function as a collective with no designated leader. The legacy and influence of American free jazz can be heard throughout: Albert and Don Ayler, or Ornette Coleman and Don Cherry for the horns of Maurice Merle and Jean Mereu; Cecil Taylor for the pianist Patrick Vollat, absent from the group after the second album La Chasse de Shirah Sharibad; Gary Peacock and Barre Phillips for the bass; Sunny Murray or Milford Graves for the rhythmic agitation; but also the Art Ensemble of Chicago for the collective aspect.

This lyrical, incandescent album, alongside those released by François Tusques and the Cohelmec Ensemble at the same period, represents one the high points of free jazz produced by French musicians.
Posted by Zen Archer at 10:19:00 PM 1 comment: 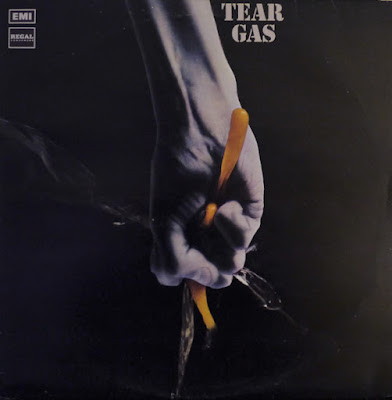 The Glasgow-based prog/heavy/rockers Tear Gas (originally known as Mustard) released their second album in 1971 establishing themselves on the underground scene.

Wullie Monro and Eddie Campbell left the band. Wullie joined Berserk Crocodiles (see Dream Police) and Ted McKenna from the freshly collapsed Dream Police replaced him. Eddie Campbell quit for whatever reason - perhaps just tired of touring - and was not instantly replaced. 'Tear Gas' released on the Regal Zonaphone label by this revised line up though Campbell appears on the 'live in the studio' medley of 'All Shook Up & Jailhouse Rock'.

An un-credited Ronnie Leahy provides the keyboards elsewhere on the album. Leahy played with Glen, McKenna and Cleminson again in the early '90s under the name of the 'Sensational Party Boys' - promoters mistook the name for a group of male strippers! ' Saw them in London in the Charing Cross Road Marquee (now a Weatherspoons) - a right good night..

Tear Gas' has an odd front cover pic. Is it meant to signify anything? If so it was lost on us. All tracks are 'hard 'n heavy rock' . Again not terribly memorable apart from 'Love Story', a highlight of the stage act, whose arrangement was visited again by SAHB on the 'Penthouse Tapes'. One is left with the feeling that the band was a couple of years behind the times in their material and the union with Alex Harvey was the shot in the arm of originality they needed. 'Tear Gas' was reissued on CD by Renaissance, a US label, in the mid '90s as RCD1005.

After the comercial failure of the 'Tear Gas' LP, Ted McKenna's cousin, Hugh McKenna, was drafted in on keyboards and backing vocals but Davie Batchelor soon left to go into production - he produced the SAHB stuff  - they all sound pretty good - but was famously dropped by Noel Gallagher during the making of Oasis' first album.

A rumour persisted for a while that he had to quit Tear Gas because he was going deaf! Hugh took over the lead vocals and this is the line-up that returned to Glasgow to join up with Alex Harvey after an unsuccessful stint in London . The rest of that story is well-documented history.

Tear Gas is a real guitar tour de force - it seems there is more guitar sound than one's ears can get. Musicianship is simply superior and songs are full of emotions, splendid guitar solos and bridges and elaborate harmonies. Bass lines are very impressive as well so the album is highly enjoyable. 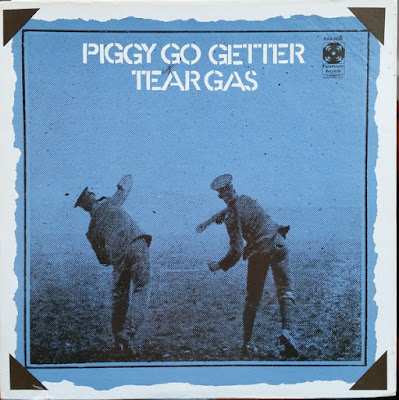 
Originally known as Mustard. Their first vocalist Andy Mulvey had previously been with The Poets. However, he was soon replaced by David Batchelor and around the same time Gilson Lavis (their original drummer, who later played with Squeeze) was replaced by Richard Monro from Ritchie Blackmore's Mandrake Root.

This line-up recorded Piggy Go Getter, which made little impact. In 1970 Hugh McKenna took over Batchelor's vocal role and Ted McKenna (ex-Dream Police) relieved Monro on drums. They recorded a second album and tried to establish themselves on the underground scene but were going nowhere with their brand of tired boogie heavy rock, until they teamed up with Alex Harvey in August 1972 to become The Sensational Alex Harvey Band.

A Glasgow, Scotland progressive band formed in the late '60's, Tear Gas initially comprised Eddie Campbell (Keyboards), Zal Clemenson (Guitar), Chris Glen (Bass, vocals), Gilson Lavis (drums), and Andy Mulvey (vocals). Mulvey had originally sung with local beat grouip The Poets. After changing from their original name, Mustard, they chose Tear Gas as a variation of the same theme. Mulvey was soon replaced by keyboard player and vocalist David Batchalor and Lavis (wholater played with Squeeze)by Richard Monroe from Ritchie Blackmore's Mandrake Root. It was this lineup that recorded their 1970 debut: "Piggy Go Getter", an album typical of the time with it's long guitar and keyboard passages. However, they were more playful than some - "We were a really loud band, in fact we used to open with Jethro Tull's 'Love Story' which started out very softly and the crowd would drift towards the front. Then we'd turn the volume up and blow everyone out of the hall!" After a couple more lineup changes, the group recorded material for a second album for a release on Regal Zonophone Records, but was met with a lackluster response from the critics. Despite regular touring in an effort to establish themselves, it wasn't until they teamed up with Alex Harvey in August 1972 to become The Sensational Alex Harvey Band that they saw any real success.
Posted by Zen Archer at 2:15:00 AM 1 comment: