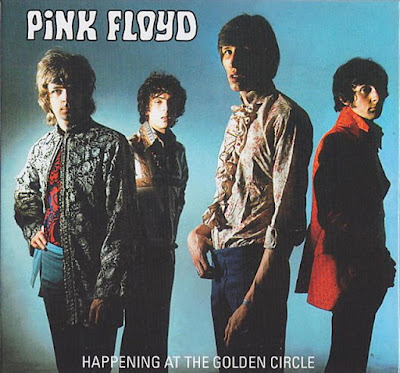 Pink Floyd’s debut LP Piper At The Gates Of Dawn was released in early September, 1967.  It was met with very positive reviews in the press with writers pointing out how it captured their style of psychedelic rock.  They followed with a short tour of Scandinavia, their first visit to the US and a lengthy UK tour with Jimi Hendrix.

Happening At The Golden Circle documents the September 10th show at the Golden Circle in Stockholm.  The second night in Scandinavia (following a show in Arhus, Denmark), Pink Floyd played on a bill with two other band before a small audience of about 300 people.

Floyd’s set was recorded by Anders Lind, one of the key figures in the Swedish progressive music scene.  He used professional microphones on a Revox tape recorder which resulted in a very clear and enjoyable tape of the entire hour long set.  It isn’t the only audience tape from 1967 in circulation (a tape from the September 13th show at the Star Club in Copenhagen also exists), but this is the best sounding.

It is good enough to draw some interest from EMI, who have approached Lind for the tape for possible inclusion on an expanded edition of Pipers At The Gates Of Dawn in 2011.

To celebrate its finding, The Golden Circle hosted an event in May 2011 to play the tape before an audience.  With Pink Floyd being represented by dummies, they sought to reproduce that evening forty years ago.  Even though the hosts begged attendees to not tape the show for fear that EMI will not use it, several people taped it onto DAT anyway.

The tape begins with the announcer introducing the band.  An opening eight minute instrumental, titled either “Before Or Since” (since Roger Waters remarks on the tape that it’s not something heard before or since), or perhaps “Reaction In G,” is unfortunately edited out of the performance.

Poor PAs are a characteristic of this tour.  They complained about it in the press, and is very noticeable on this tape.  The vocals are very low to being non-existent.  Much of the show sounds like long improvisations, especially in the first two numbers “Mathilde Mother” and “Pow R Toc H.”

“Scream Thy Last Scream” is Barrett’s latest single, a follow up to “See Emily Play,” and is his personal highlight in the set.  The middle section has hard and abrasive riffs reminiscent of punk.  It reaches an intense climax before coming to an end.

Roger Waters’ “Set The Controls For The Heart Of The Sun” follows.  His vocals can be heard quite clearly.  It’s a quick tempo performance but it still gives a glimpse into their “space rock” phase yet to come, a structured psychedelic masterpiece.

“See Emily Play” is the nicest surprise.  Although there are several TV performances, this is the first recording of the song in front of a live audience in a concert setting.  The vocals are very low but the instruments are clear.  The sped-up piano in the studio recording is replaced by a stomping riff used to mark time.  It is a tricky song to play live and there are some rough parts, but Barrett’s slide guitar is very interesting.

The set closes with a nine minute “Interstellar Overdrive.”  It sounds very aggressive with a brilliant improvisation in the middle.

Godfather include the AFAN Festival fragment from 1969 as filler.  This appearance in Wales occurs soon after Ummagumma was released and is their final live performance in the sixties.

It is an audience recording taped close to the stage.  Making its silver disc debut, it’s not a bad recording, but it is very short.  “Interstellar Overdrive” is the first track on the tape and is much advanced compared to early versions.  It is very dramatic with Nick Mason’s syncopated jungle rhythms punctuating Waters’ thumping bass and Wright’s swirling keyboards.  It’s a brilliant performance which is unfortunately cut after twelve minutes.

“Green Is The Colour” segues with a particularly brutal “Careful With That Axe, Eugene.”  The tape ends with a long and spacy version of “Set The Controls For The Heart Of The Sun.”

Happening At The Golden Circle is packaged in a trifold gatefold sleeve with many photographs of the May 2011 event reproduced inside.  Its release probably means EMI won’t use the tape for their expanded edition of Piper At The Gates Of Dawn.  It’s a silly threat really since the opening jam still hasn’t been heard.  Hopefully the record label is merely bluffing and we’ll soon hear the complete set.
Posted by Zen Archer at 6:05:00 PM