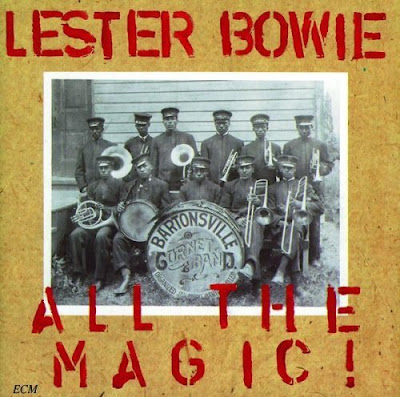 For his second ECM album as leader, the late trumpeter and all-around wise guy Lester Bowie presented us with this intriguing twofer. The A session is dominated by two longer cuts. The first, “For Louie,” is an ode to Satchmo to end all odes. Clear and present trumpeting wails and jackknifes against the fluttering keys of Art Matthews (who also enlivens the runaround of Bowie’s “Spacehead”) as soul man Ari Brown finger-paints with his charcoal tenor. As if that weren’t enough to whet your appetite, vocalists Fontella Bass, Bowie’s wife and co-writer of the hit “Rescue Me,” and her younger brother David Peaston lay on the gospel. Incidentally, the b-side to “Rescue Me” was a song called “Soul of the Man,” and this is exactly what we hear. The school band feel of Albert Ayler’s “Ghosts” then haunts us only briefly before plunging us into the album’s second major opus. The “Trans Traditional Suite” is a sultry nod to transience in a rolling tide of brushed drums and cascading piano. This opens halfway through into a free-for-all of convoluted joy, as if to flesh out these songs’ essential message to embody in sound what it claims through word. Brown’s tenor solo speaks loudest here. The band caps things off with a legato version of “Let The Good Times Roll.” Bowie spits fire, fluttering and soaring by turns alongside that same heady tenor. Bass and Peaston reappear, matching Bowie’s penchant for humor tit for tat.

The B session, though bound by the same spirit, couldn’t be more different in execution from its counterpart. Here we find Bowie in a 35-minute solo excursion that reveals his artistry in the flesh. From the flying harmonies of the two Organic Echoes (for which he plays into an open piano) and the tongue-in-cheek ceremony of “Dunce Dance,” and on to the experimental whimsy of “Thirsty?” (in which he blows as if through a drinking straw) and “Miles Davis Meets Donald Duck” (exactly what it sounds like), Bowie abides by a richness of color that is uniquely his own. Other highlights include the church bell sweep of “Almost Christmas” and the affectionate “Deb Deb’s Face.”

This album is so rich that you may not feel a need to listen to it often, but when there’s room for it, it’s sure to hit the spot and then some.