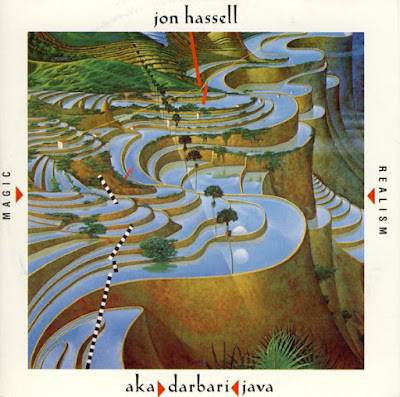 MAGIC REALISM • Like the video technique of "keying in" where any background may be electronically inserted or deleted independently of foreground, the ability to bring the actual sound of musics of various epochs and geographical origins all together in the same compositional frame marks a unique point in history. • A trumpet, branched into a chorus of trumpets by computer, traces the motifs of the Indian raga DARBARI over Senegalese drumming recorded in Paris and a background mosaic of frozen moments from an exotic Hollywood orchestration of the 1950's [a sonic texture like a "Mona Lisa" which, in close up, reveals itself to be made up of tiny reproductions of the Taj Mahal], while the ancient call of an AKA pygmy voice in the Central African Rainforest — transposed to move in sequences of chords unheard of until the 20th century — rises and falls among gamelan-like cascades, multiplications of a single "digital snapshot" of a traditional instrument played on the Indonesian island of JAVA, on the other side of the world. • Music which is to this degree self-referential, in which larger parts are related to and/or generated from smaller parts, shares certain qualities with "white" classical music of the past. AKA/DARBARI/JAVA is a proposal for a "coffee-colored" classical music of the future — both in terms of the adoption of entirely new modes of structural organisation [as might be suggested by the computer ability to re-arrange, dot-by-dot, a sound or video image] and in terms of the expansion of the "allowable" musical vocabulary in which one may speak this structure — leaving behind the ascetic face which Eurocentric tradition has come to associate with serious expression. • JON HASSELL

The beautiful cover painting by Mati Klarwein serves as an appropriate visual analogy for the music contained herein: an abutting of two worlds, an insinuating blend of early-'80s high tech with ancient Southeast Asia. Over varying, non-specific rhythms supplied by Abdou Mboup, Jon Hassell weaves a music both evocative and plaintive, his modified trumpet sighing like an old Javanese horn pulled into the digital age on its way to what he calls a "coffee-colored" future where all ethnic traditions become one. The astonishingly vocal sound he gets from that treated trumpet is certainly one of the signatures of this album and one of the more lovely sounds heard anywhere. His compositions have a bit too much direction and drive to comfortably settle into the term ambient, but they remain as relaxed and gently meandering as a jungle stream. One especially nice feature is the subtle electronic burblings that whisper in the background, creating an enticingly busy sense of space. Aka/Darbari/Java is an early high-water mark at the juncture between world and ambient musics.
Posted by Zen Archer at 3:46:00 PM