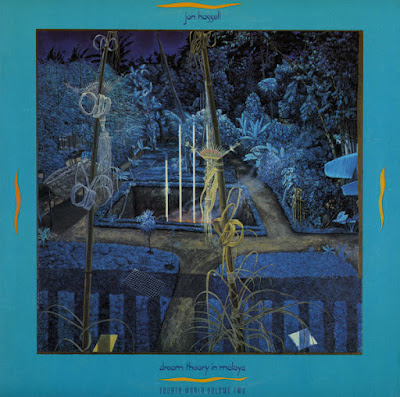 
In the 1930s, the Mormon missionary-turned-novice anthropologist Kilton Stewart happened upon an indigenous tribe in the Central Mountain Range of Southeast Asia’s Malay Peninsula. After his time spent among the Senoi, Stewart was struck by what he deemed the tribe’s close proximity to dream worlds. “The Senoi believes that any human being, with the aid of his fellows, can outface, master, and actually utilize all beings and forces in the dream universe,” Stewart wrote in his 1954 book Pygmies and Dream Giants. The notion of such dream interpretation slowly moved westward; dream discussion groups have proliferated into the present day.

The trumpeter and composer Jon Hassell may have titled his fourth album, Dream Theory in Malaya, after Stewart’s paper. But in the notes that accompany this reissue, he finds himself taken less by Stewart and more by “the cinematic sound of the word ‘Malay’” and “a little romance with an exotically-tuned woman from Kuala Lumpur.” Such transubstantiation lies at the heart of Hassell’s music, wherein jazz fusion and minimalist composition, ambient and exotica, ancient ethnic music and glitchy electronics all jostle for headspace. This 1981 album fully synthesized such a hybrid for Hassell’s decade ahead, when his influence would snake through the work of his closest collaborator Brian Eno as well as the likes of David Sylvian, Peter Gabriel, and Tears for Fears. While Eno coined the concept of Another Green World, it was Hassell who imagined the indigenous sounds of this planet, a notion that came to be known as Fourth World music. Now into the 21st century, new producers are still grappling with its possibilities.

To find Hassell’s trumpet here is to be spun into a hall of mirrors, the timbre of his horn stretched, chopped, twisted, and processed beyond recognition. Take the maddening glitches of “Chor Moiré.” Thanks to an early use of digital delay effects, it reimagines Hassell and the horn as a skipping CD—as malfunctioning birdcall, as fingernail on sandpaper—anticipating the sounds of late 1990s clicks’n’cuts and the Mille Plateux roster in just over two minutes. Thanks to the harmonizer effect deployed by Hassell, the trumpet’s timbre on “Dream Theory” can sound like an amplified sigh, like a divine choir, and then like a telephone wire of cawing crows at sundown.

As readily as Hassell warps his instrument into strange new shapes, he also finds accomplices from all corners. Dream Theory receives input not just from Eno (in hindsight, Hassell admits to “under-crediting” him) but also from famed land artist Walter De Maria. There are contributions from a bog of frogs, some exotic birds, and a few seconds from a field recording of Proto-Malay kids splashing in some water and giggling at the sound it makes. All such elements toggle between melody, texture, and rhythm in Hassell’s matrix, almost any one of them liable to shape-shift over the duration of a piece. So when the thundering drums of “Courage” enter, they suggest a furious propulsive movement. But as Hassell smears his trumpet across their polyrhythms, they instead turn atmospheric, hanging in place. The breathy ambience of “Gift of Fire” soon grows dense and dizzying with its loops and layers.

Dream Theory’s compositions act as aural illusions, seemingly static and inert, though they deposit you on another shore by the time you reach the other side of a longer piece like “Malay.” Hassell anticipates the looped angelic vocals of Juliana Barwick with his horn during its opening section, before it fans out to sound like his own impression of a pygmy tribe’s vocal trills, mingling with those aforementioned kids and their splashed rhythms. That water sample continues to slosh around and widen until it becomes an ocean, with Hassell hovering over its surface like an alien craft. While Dream Theory’s roots touch on minimal composition, jazz, raga, and ambient, Hassell ultimately follows his own dream logic, conjuring not just another world but also its own atmosphere.
Posted by Zen Archer at 3:32:00 PM