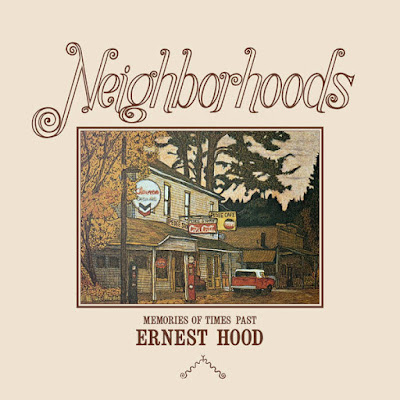 In 1975, the Portland, Oregon, musician Ernest Hood pressed his lone solo album, Neighborhoods, in an edition of a few hundred. He passed out copies primarily to friends, and the album, a curious blend of found sounds and proto-ambient, disappeared into the Pacific Northwest mist. Newly reissued by Freedom to Spend (in a much improved pressing, spread across two discs), it’s not the first such rarity to be pulled from the ether in the 21st century, as YouTube’s algorithm accumulates millions of plays for once obscure jazz and new-age records. But it might be the most uncanny, an album that kindles a sensation not unlike watching home videos of your own childhood.

If you’ve sat in the yard at dusk right before the mosquitoes come out, ridden a bike through the suburbs in the summertime, or even just driven around your own neighborhood with the windows rolled down, you’ll hear in Neighborhoods an aleatoric sound set in amber. Who was the fellow that plucked out such moments of everyday life, pared them down, and wove it all together?

Born in 1923, Hood grew up in a time when kids ran unsupervised all day long and the most enthralling sound was big-band jazz. Hood picked up the guitar and started playing ballrooms with a jazz band (his brother Bill would go on to have a moderately successful career in the industry), but in the early 1950s, while still in his twenties, he fell victim to a devastating polio outbreak. He spent a year in an iron lung and for the rest of his life used leg braces, crutches, and a wheelchair to get around. He could no longer hold a guitar in his lap, so he took up the zither. At one point in the early 1970s, Hood’s zither could be heard on Flora Purim’s early albums, mixing in alongside fusion stars like George Duke and Stanley Clarke.

His own career in jazz might have ended abruptly, but Hood remained a presence in Portland, where he cofounded the KBOO community radio station. (Before his death in 1995, post-polio syndrome took away even more mobility as well as his ability to speak and he became the public face of the Death With Dignity Act.) And while his guitar playing was halted, he continued to study recording and production. Starting in the mid-’50s, Hood began using a wire recorder to collect the sounds around him, eventually upgrading to a reel-to-reel and microphone, assembling his field recordings into “audio postcards” for his radio show. As the liner notes recount, Hood would surreptitiously park around Portland, “blacking out the windows of his car with a dark cloth to act as a windbreaker,” which attracted a fair bit of notice from concerned neighbors.

It wouldn’t be until 1974 that Hood started assembling all these field recordings and snatches of dialogue into Neighborhoods, weaving in the voices of his own son and family friends. He was in his early fifties at that point and envisioned the album as a nostalgic glance back at his own childhood, a period rapidly fading from memory in the post-war era. There’s talk of a sunken riverboat and steam-powered trains, and the scrape of a game of kick the can, not all that far removed from what Ray Davies would sing on Kinks albums. But you never get the impression that Hood is pining for these lost times so much as documenting the peculiar similarities between his own bygone youth and what he could hear all around him in that moment.

The album opens with birds, barking dogs, a kid tooting on a whistle, a passing car—the kind of stuff that rushes in whenever you pull up your garage door. When Hood’s own zither and synth musings bloom to life, they move with a logic like the wind in the trees, picking up speed and then dying back down, meandering along at their own pace. He gets one of his early synthesizers to chirp along with bird sound in one moment, and then to mimic a tune the kids down the street are yelping the next.

Hood’s musical musings never take over, but rather move in and out of earshot. Sometimes he strums a whimsical air like something lifted from Mr. Rogers’ Neighborhood, and at other times he echoes a radio tuned to an old jazz song. The synth melody that gurgles up throughout “Gloaming” brings to mind another album that wove together pioneering synth work and field recordings, Stevie Wonder’s Journey Through the Secret Life of Plants. Neither moving toward a song nor getting lost in the other sounds, Hood lets it all come to him. While the recordings are documentarian in their way, the music is as vague and open-ended as daily life. There are moments when you might be hard-pressed to notice Hood’s signature at all.

“It hardly matters in which neighborhood you sprouted,” Hood wrote in the original liner notes. “The games we played… and the feelings we experienced… are tantalizingly familiar.” Songs with names like “At the Store” and “After School” could be set just about anywhere. Hood susses out a symphony in the daily noise of American life, like Charles Ives with a portable tape recorder or Norman Rockwell with an early synthesizer prototype. In some passages, Neighborhoods doesn’t feel like a half-century-old curio, but as of-the-moment as a walk to the train. Put it on, hear children shouting out songs, crickets chirping, and the noise diesel engines rumbling past and feel the illusion of time dissolve: You’re in Ernest Hood’s neighborhood.
Posted by Zen Archer at 7:24:00 PM