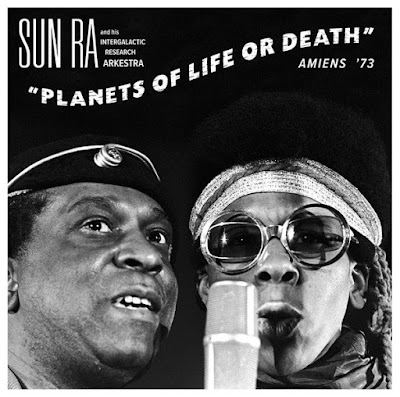 A previously unreleased Sun Ra concert from Amiens, France in 1973. At times intense, ritualistic and visceral, the recording features the glistening ‘Lights On A Satellite’ featuring the spiritual tenor sax of John Gilmore and a rare instrumental version of ‘Love In Outer Space’

Pretend you know nothing about Sun Ra. Imagine that all you know about him is, well, a colourful pile of nothing. You casually attend a Record Store Day in your city and pick up the only copy (amongst the very few sold exclusively on that day) of this vinyl they have. You’re intrigued by the cover, the name, your very inexperience, and while you leave the premises with yet another Radiohead album under your arms, you forget about the bucks and quid that other album cost you until you sit on your favourite armchair in the comfort of your mortgaged house. Your partner, whose affection for you is somehow stronger than the decades-long relationship you have chosen to entertain with your favourite financial institution, is away, so you’re left in the house to fend for yourself. Well, then what? What happens once Sun Ra & His Intergalactic Research Arkestra fill every corner of the room with waves of afrofuturism? How ready were you for the magic that is -- by now -- bursting at the seams right when “Love in Outer Space” flourishes, shines and withers in a time that is more or less equivalent to In Rainbows’ Side A.

You see, this is absolute music; an abstraction of the abstraction and nothing else. There is no explanation, no discipline and we are left fewer and fewer coordinates. Therefore plenty of them! One might hear Pink Floyd’s Ummagumma (“Love in Outer Space”), Mulatu Astatke’s Ethio-jazz, Magma, Ornette Coleman, John Cage and even some Radiohead. Another will appreciate the simplicity of cacophony in all its splendour, the contrast between harmonies (the vocals on “Enlightenment”), the beauty of percussion and the charm of a Sunday afternoon in Amiens, France in 1973.

Same as you, who knows if the audience was expecting this, or if someone was disappointed to see that the canons of jazz were being torn to pieces right before their eyes. Maybe not, I’d like to think. But this accurate recording (captured right off the mixer) depicts an ensemble at its zenith and an artist who was already somewhere else far, far away. John Gilmore’s sax sinuously progresses through “Lights On A Satellite”, but it is with the instrumental “Love In Outer Space” that the magnitude of Sun Ra’s experimentalism intensifies, ripping apart the structure, bouncing through the obsessiveness of the percussive elements and the illogical cleverness of a legendary free spirit.

This album follows 2014 collection put together by Arkestra’s Marshall Allen (In The Orbit Of Ra), and is the joint effort of two of the most recognisable labels of the underground, Strut and Art Yard, and is enriched with rare images from that very tour taken by Jan Persson.

Whatever your reaction, Planets of Life or Death: Amiens '73 is a genuine, unaltered picture that is definitely worth a listen, both if you already know what to expect or if this is your sonic baptism with Sun Ra’s music. Whatever your starting point, this record will not go unnoticed. It embodies cosmic jazz as seen by a visionary and the end result is a beautifully confused, layered little gem.
Posted by Zen Archer at 3:01:00 AM