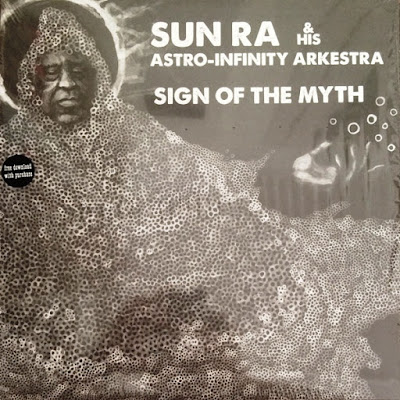 In 1973, Sun Ra inked a high-profile deal with ABC / Impulse, bringing his recorded work to the widest audience he’d had to date. A slew of Saturn back catalog titles and two newly-recorded albums (Astro Black, Pathways To Unknown Worlds) were issued before ABC cancelled the contract, dumped the records into the cut-out bins, and left the unreleased albums to languish. Now, over four decades later, Roaratorio is proud to offer one of the lost Impulse recordings for the first time. Sign Of The Myth hails from the same studio session as Pathways, and shares its emphasis on guided improvisations. With a constantly shifting palette of Moog textures, Ra tosses off a dazzling array of ideas throughout, supported by the usual Arkestra stalwarts; in particular, bassist Ronnie Boykins and drummer Clifford Jarvis are in shining form here, giving shape and solidity to these pieces. Sign Of The Myth is a welcome augmentation to an especially fertile period from Sun Ra’s time on Earth.

Sign of the Myth originates from the Pathways To Unknown Worlds sessions and like In the Orbit of Ra, maybe the best of all 2014 releases, it also captures the brilliant and underestimated bass work of Ronnie Boykins – while Ra concentrates on spooky, spacey and psychedelic synthesizer sounds, which are like an electric carpet contrasting the wave of percussion and the free jazz reeds lines of the reed section consisting here of Eloe Omoe, Danny Ray Thompson, Kwame Hadi, Akh Tal Ebah, Marshall Allen, Danny Davis, and John Gilmore.  With a constantly shifting array of Moog horror movie sounds, Ra structures the pieces, for example the title track, which can keep up with the best Arkestra tracks. Ra, Boykins and the percussion section start off before the saxes fall in trying to take control of the improvisation but in the end it is Boykins’s walking bass and Ra’s synth lines which prevail and even give an outlook to where the Arkestra was heading with Disco 3000 only five years later.
Posted by Zen Archer at 1:57:00 AM