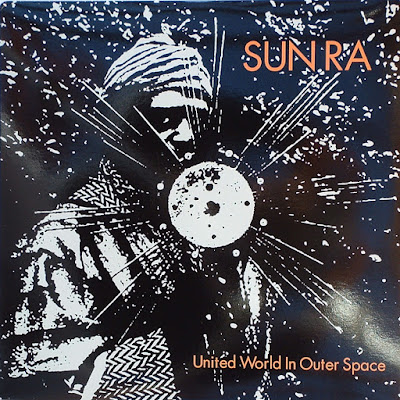 Recording is from the Waitawhile Sun Ra Archives
Recorded live in Cleveland, January 30, 1975

"Recorded live in 1975 at Cleveland's legendary Smiling Dog Saloon when Ra and his Arkestra descended on the club for a week-long residency."
(from the sticker on the sleeve)


Decades before his time, political and musical revolutionary, Sun Ra, developed a new plane of cultural existence where black people were all-powerful beings from outer space, sending their intergalactic message through jazz music. Recorded live in 1975 at Cleveland's legendary jazz club, the Smiling Dog Saloon, when Sun Ra and his Arkestra descended on the city for a week-long residency. You can imagine how the uninitiated's jaw must have dropped when Ra and his 15 musicians marched out onto the stage decked in glittery space costumes, playing percussion instruments and chanting. This high quality live performance is top-shelf Ra playing a kind of spaced out world music with hints of disco. Ra sings, plays the Moog, piano and organ, while everyone else plays alternately some kind of percussion or reed instrument, sings, dances, and claps hands. Check out his other-worldly version of Duke Ellington's 'Sophisticated Lady', featuring John Gilmore on sax, and his extended Moog solo!

Sun Ra and his Arkestra delivered a sizzling performance heavy on disco-laced rhythms on January 30, 1975, in Cleveland, Ohio, which has finally surfaced for this CD release.

As with so much live material that has reached the marketplace since Sun Ra's spirit left the planet in 1993, the recording is "bootleg" in quality. But the quantity of power is not diminished by the rough mix, as Sun Ra keeps the pace hot on piano, Moog and organ.

Astro Nation (of the United World in Outer Space) is a funky masterpiece, which sets the stage for an exploration of the heart and soul in Enlightenment. The pace does not slow down for Love In Outer Space, Theme of the Stargazers/The Satellites Are Spinning and Friendly Galaxy 2/I Am the Brother of the Wind/I, Pharoah. A frenetic Moog solo by Sun Ra leads to a 14-minute closer; a classic rendition of Duke Ellington's Sophisticated Lady.

Unless another source tape surfaces, this release will be the definitive account when Sun Ra let loose on the frigid North Coast. Snow ploughs were not needed in the area for a week after this scorching show.

There's a whole slew of unreleased live Sun Ra recordings coming out at the moment. Some are patchy, some ok, some so inaudible you wonder why they bothered, but this Cleveland date is by far the best of these lost live recordings I have heard. To be honest, it's the best live Ra recording I've heard full-stop. Apart from the obligatory looooong keyboard solo, that pretty much always appear on Sun Ra's live stuff, the rest, well it's just like no live Ra I've heard before. There's electric bass used here, so it kind of has that real funk Strange Celestial Road feel to it, but minus the psychedelia. The opening track could easily be an early Funkadelic bootleg. And there's so much band vocalising/chanting too, which always adds an element of fun. Plus some cool spoken word too. Overall though, it's the bass that really makes this album. In places it's so repetitive, it becomes almost hypnotic. Check the third track in the long medley "I, Pharaoh". Wow, talk about trance educing. Very, very recommended.
Posted by Zen Archer at 3:48:00 AM