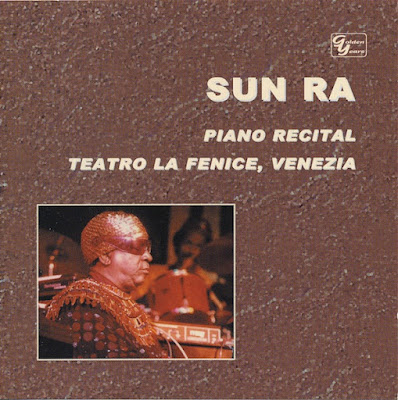 This is the hippest solo piano CD you're ever going to hear that features old time standards like "Take the A Train," "St Louis Blues" and "Honeysuckle Rose." That's because the artist involved isn't some wannabe young lion aiming for mainstream cred or a palsied trad jazz survivor nostalgically re-creating the sounds of his youth. Instead, the hoary jazz standards are slotted in among certified Saturnian melodies and improvisations by a figure who during his time on earth seemed to be part of all strands of improvised music: Le Sony'r Ra, known familiarly as Sun Ra (1914-1993).

Recorded live in Venice in 1977, these rare solo performances find Ra revisiting all facets of his career. With Ra there was never the divide between entertainment and art that marks the performances of younger, more self-conscious tone scientists, a term he preferred to musicians. Thus when he plays a simple blues he brings more dissonance to his left handed feints then you usually associate with the traditional sounds. When he performs his own "Angel Race," he begins by singing variations on the outer space theme.

As he continues playing, he works in some "I Got Rhythm" variations, showcases an allegro Afro-Cuban interlude and quotes passages from others of his compositions. In the same way "Love In Outer Space" is treated orchestrally and is lightly syncopated, with tinkling right hand tremolos meeting the theme advanced with his left hand. This is precisely the way pre-war stylists like Earl Hines treated piano showcases like his "Boogie Woogie on St. Louis Blues," which has its echoes in Ra's version of the piece, complete with strummed octaves and subterranean rumbles in left hand as the right picks out the sprightly melody. As a young pianist first in Birmingham, then Chicago, Ra (then Sonny Blount) must have heard and admired Hines' work.

It's known he was strongly influenced by Fletcher Henderson, who first employed him. His version of "Penthouse Serenade" here, which becomes a honky-tonk showcase with pumping piano chords and effervescent voicing, is probably similar to the sort of tunes he'd come up with for dance rehearsals, when he was working for Henderson in Chicago's Club DeLisa in the 1940s. In other spots, Ra uses pedal pressure to vibrate the 32 bass strings for extra oscillations and recasts a familiar pre-war melody with strong upbeats, chordal downbeats, flashing cascading chords and sharp key clips.

At one point he—in all seriousness—invites audience members to join him at a party in Jupiter sometime in the future. Reflecting the title without dispute, this CD is a valuable and rare piano recital. For Ra, myth-making and music-making were one and the same. Listen to this and learn to accept Ra on his own terms.