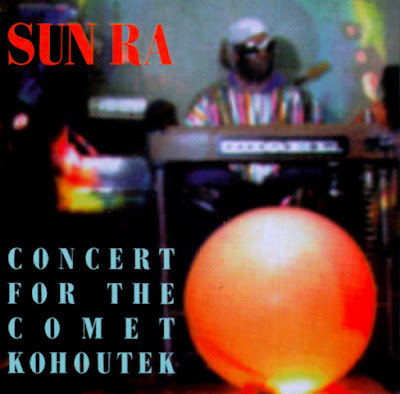 Composer, keyboardist and bandleader Sun Ra's intimate connection with the cosmos is well documented, but it was rare that Ra was given cause for real celestial celebration. That opportunity did come in 1973 however, when Ra and his orchestra played a show in celebration of Kohoutek, a comet whose sighting was billed as the "Comet of the Century." Though the comet was ultimately a visual disappointment, the concert was an aural success; the Arkestra is in a loose and comfortable realm on Concert for the Comet Kohoutek, whose release only came in the early '90s before being reissued.
The crowd's enthusiasm toward Ra is palpable even before he gets on stage—the M.C. is amicably disposed of in favor of the Arkestra—and it is with this energy that Ra's band (the personnel of which is unfortunately unlisted) jumps into the funky vocal workout of "Astro Black." Likely it is Space is the Place's (Blue Thumb, 1973) June Tyson leading the proceedings here as she guides the chaotic horn lines of the intro into a mellow groove whose rhythmically textural mysticism paves the way for the fifteen minute free workout of "Discipline 27 (Part 1)." Starting out in Ra's typical big band mode, with rich arrangements and a distinctly Ellingtonian sense of harmony, the work soon dissolves under crushing electronic synthesizer tones and horn blasts that build to become some of the most overtly chaotic and outright weird material that Ra would put to tape before erupting in a wash of kinetic celebration.
"Enlightenment" provides respite with another vocal number before the celebratory poly-rhythmic jaunt, "Love in Outer Space," if slightly laboriously, grooves along. The aptly titled "Kohoutek" opens with a Ra keyboard improvisation, again featuring his markedly fried synthesizer sounds. Still, the piece maintains a relative sense of stability with consistent backing work and a tight-knit big band opening. It's length soon provides the means to loosen as well. However, before it's finished, the piece dissolves into crumbling synth textures and harmonic dissonance that still manages to maintain its sense of direction.
Again, Ra organizes the show's pacing by inserting another lyrical number, "Discipline 27 (Part 2)," to settle the groove. The crowd's enthusiastic game of call and response is surely aided by the kazoos they were given at the start of the show. The closing rendition of "Space is the Place" is a heavy affair, with thick low end synthesizer harmony lines that hearken in Tyson's vocals and the rest of the band's taught interaction. It is a fitting end to a night that saw Ra and his Arkestra doing what it does best—if a little sloppily at times—for a cause that could not be better situated for their unique mode of performance.

Released in the early '90s, Concert for the Comet Kohoutek captures a typically inspired night by Sun Ra & the Intergalactic Space Research Arkestra. Recorded in late 1973, on this date the Arkestra is guided by a musical theme composed around the idea of the Comet Kohoutek, which was passing close to Earth at the time. Typically, the release vaults between cosmic vocal songs that speak of Truth and other such brashly capitalized affairs (such as "Astro Black"), almost straight-ahead big-band jazz arrangements ("Variations of Kohoutek Themes"), and frighteningly evil free explorations ("Journey Through the Outer Darkness"). Much of the Arkestra's appeal lies in its ability to navigate gracefully through these moods. Unfortunately, the balance is too even here, and the band doesn't commit to any of the ideas. There isn't enough free music to let the listener become lost, the few Sun Ra compositions (in the traditional sense) that appear are too undeveloped and sloppy to truly appreciate, and the cosmic platitudes always worked better in their purely instrumental forms. An enjoyable listen, but not an important date.