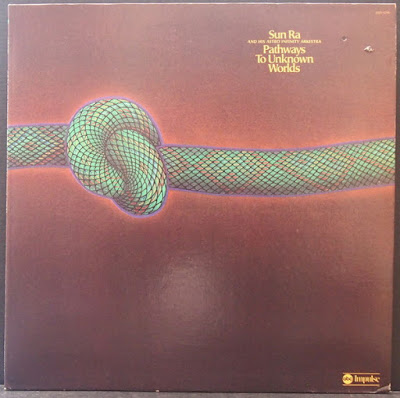 The civilizations of the past have been used as the foundation of the civilization of today. Because of this, the world keeps looking towards the past for guidance. Too many people are following the past. In this new space age, this is dangerous. The past is dead and those who are following the past are doomed to die and be like the past. It is no accident that those who die are said to have passed since those who have passed are "past". - Sun Ra -

Pathways to Unknown Worlds was originally issued on LP in 1975 as part of Sun Ra's ill-fated and short-lived ABC/Impulse! Records partnership. ABC offered an ambitious deal that promised dozens of remastered editions of Sun Ra's Saturn back catalog along with a slew of new titles. The launch fizzled shortly after liftoff, but not before introducing two vital albums to the Ra catalog: Astro Black and Pathways. (Astro Black was reissued in all formats by Modern Harmonic in 2018.)

Ra’s original Pathways liner notes expressed his disdain for the past and his vision of the future. But the future here rendered by Ra seems more dystopian than utopian. Imagine this album as an aural Science Fiction novel, analogous to the contemporaneous writings of Philip K. Dick, Harlan Ellison, Samuel R. Delany, and others who dwelled in unknown worlds where confusion and chaos often reign. A cybernetical soundscape for time travel through an inscrutable cosmos.