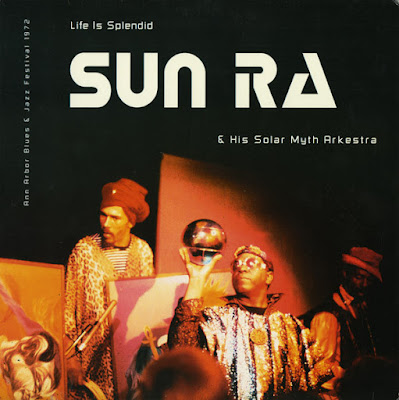 A document of Sun Ra’s performance at the 1972 Ann Arbor Blues & Jazz Festival, Life Is Splendid captures the Arkestra in peak psychotic form-and I mean that in a good sense. While on earlier ’50s and ’60s outings, Ra’s orchestra still had one foot solidly in the camp of Fletcher Henderson’s orchestral elegance as it explored the outer reaches of the avant-garde, this post-Woodstock, post-Hendrix edition of the Arkestra is solidly tuned into the electro-psychedelic vibe of the day. The sheer intensity here makes Miles Davis’ electrified Agharta and Pangaea bands look tame by comparison. Seething and cathartic, the Arkestra connected with MC5 fans then and relates more today to Sonic Youth than to the Lincoln Center Jazz Orchestra.

The Arkestra’s 37-minute set modulates from theme to theme and mood to mood, opening on a fairly melodic note

with the two-minute, metaphysical “Enlightenment,” sung by June Tyson. The band segues to a frantic, polyrhythmic percussion jam fueled by Ra’s grungy, organ distorted tones. The raucous, over-the-top excursion “Love in Outer Space” should appeal to the fringe elements of the Medeski, Martin & Wood crowd. The sickness factor only picks up from there on “Discipline 27-11,” reaching frightening proportions during Marshall Allen’s shriekback alto solo and Ra’s own horrifically dissonant synth solo.

Ra’s anthemic “Space Is the Place” is layered with more spiky Marshall Allen statements and some throat-ripping, octave-leaping by either Tyson or one of the Space Ethnic Voices (Judith Holton, Cheryl Bank, Ruth Wright). We don’t get to hear much of tenor sax giant John Gilmore or baritone sax ace Pat Patrick throughout the disc, but we do hear drummers Lex Humphries and Alzo Wright unleash an explosion of drums and percussion on “Watusi” that sounds like every metal and wood object inside your house falling down an infinite flight of stairs. The Arkestra’s set ends with “Outer Spaceways Incorporated,” a Ra ditty that encourages the audience to sign up-just before he hits the launch button on his synth.

A disturbing and wonderful document from the archives of John Sinclair.

This lists six tracks on the sleeve (nine if you count the one titled "Discipline 27-11/What Planet Is This?/Life Is Splendid/Immeasurable" as four discrete pieces), but it's actually one continuous 37-minute performance from Ra's "Space Is the Place" suite. Recorded live at the Ann Arbor Blues & Jazz Festival on September 8, 1972, it is actually incomplete: as producer John Sinclair writes in his liner notes, "The opening sections are not available because a proper mix could not be achieved until several minutes into the performance." It's a decent, energetic slice of the kind of music typical of Ra's performances during this time, moving back and forth from June Tyson's moving, incantational vocals to freer instrumental passages highlighting Ra's organ. Those passages, not unexpectedly, get freer and freer until they teeter on the edge of bursting, sometimes putting wailing brass, Ra's careering "space organ," or pummeling percussion at the forefront. The sound is good, better (as is the music) than the 1973 Ra performance at the Ann Arbor Blues & Jazz Festival that was issued by Total Energy on the Outer Space Employment Agency album.

Life is Splendid is an unfortunately overlooked posthumous live recording of Sun Ra & His Solar Myth Arkestra from their September 8, 1972 performance at the Ann Arbor Blues & Jazz Festival (by virtue of being released on the relatively obscure Total Energy Records label). Capturing the group at the peak of their powers, here they are at their chaotic, cathartic, and futuristic best. The proceedings are ratcheted up a notch during "Space is the Place," especially as vocalist June Tyson nearly shatters her vocal cords in the process of doing some Yoko Ono-inspired (or perhaps the other way around) throat singing. The 37-minute suite is swirling with continuous action, whether it's the buzzing industrial hum of Sun Ra's keys or the team of six percussionists driving the action with a heart arrhythmia pulse. This set compares favorably to one of Sun Ra's most widely distributed vinyl recordings, It's After the End of the World: Live at the Donaueschingen and Berlin Festivals, as it has better sound quality and has fewer lulls. If you want to know what it's like to get blasted into space, Life is Splendid is the recording for you.
Posted by Zen Archer at 11:58:00 PM