Sun Ra
1993
Soundtrack for the Film "Space is the Place" 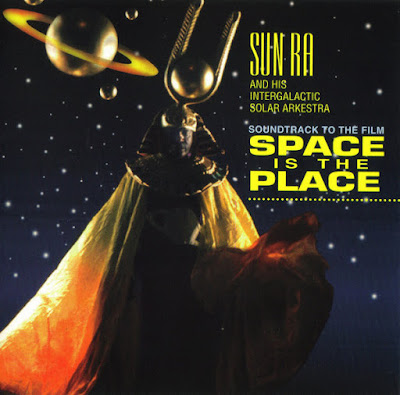 Film produced by Jim Newman.
All selections were recorded in Oakland, California in 1972, for inclusion in the film Space is the Place.
This music is previously unreleased.

Space Is the Place is the soundtrack to a film that was made but never released, and the tunes are among his most ambitious, unorthodox, and compelling compositions. Between June Tyson's declarative vocals, chants, and dialogue and Ra's crashing, flailing synthesizer and organ fills, and with such songs as "Blackman/Love in Outer Space," "It's After the End of the World," and "I Am the Brother of the Wind," this disc offers aggressive, energized, and uncompromising material. Ra's pianistic forays, phrases, and textures were sometimes dismissed as mere noodling when they were part of a well-constructed multimedia package. This comes as close as any of Ra's releases to being not only a concept work but a blueprint for his live shows from the early '70s until the end of his career. Features some previously unissued cuts.

Some of it is very wild, some pieces feature familiar space chants lead by the terrific June Tyson, others have distant horns with cavernous reverb, still others are heavy percussion workouts, and some are oddball synth pieces. All in all, this encompasses just about everything Sun Ra is about, and provides a perfect snapshot of his most daring and productive period. Highly recommended to adventurous listeners who want to learn more about this giant's music and figure out which way they want to go with it. If I had one tiny complaint, it's that individual players - Tyson aside - aren't given a lot of solo room. Also, I put this on just after listening to Iannis Xenakis' Musique Electro Acoustique and I think that however fringe-y and belittled Sun Ra may be in the popular view, his electro-acoustic music holds up as well or better than the more revered composer's works.
Posted by Zen Archer at 11:43:00 PM