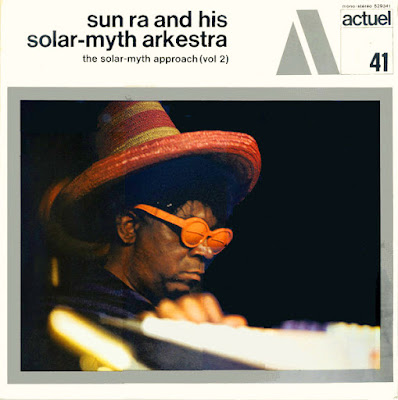 Recorded between 1970-1971, The Solar Myth Approach, Vol. 2 is comprised of solo keyboard explorations by Sun Ra, couched in between two free-form workouts by his whole Arkestra. Kicking off the set is the first band workout "The Utter Nots," which, amidst a relentless Afro-percussion backdrop, features a loose mix of fiery and mild statements by most of Ra's main soloists (alto saxophonist Marshall Allan, oboe player James Jackson, tenor saxophonist John Gilmore, et al.). The more frenetic of the two Arkestra features, "Strange Worlds," alternates between full band outbursts and cryptic keyboard and vocal interludes. The highpoints of the album, though, are Ra's wonderfully strange excursions at the keys. Evoking a child's outer-space play land, Ra produces a dizzying whirl of celestial noises on the Moog synthesizer for "Scene 1, Take 1" while switching the keyboard to harpsichord mode for a hauntingly beautiful meditation of baroque proportions on "Pyramids." The final solo finds Ra running amok over both the piano keyboard and the strings inside, producing a ghostly haze of sound. Balancing out the momentous proceedings are two brief and whimsical numbers, "Ancient Ethiopia" and "Outer Spaceways, Inc.," the last of which includes a pleasant vocal request to join Sun Ra and the Arkestra on a journey to world beyond, an invitation implied throughout the disc.

Further tracks from the same session (or sessions) that produced The Solar-Myth Approach Volume 1. (That the Sun Ra discography is a labyrinth of false leads and dead ends, with different albums and tracks sharing the same names and sometimes the same work appearing with different names, and that Sun Ra then often shuffled everything up to increase the confusion, seems to suit the chaotic impulses of the music. And if I hadn't actually heard the music I would suspect that Sun Ra was a Borgesian fiction.) And the music carries on in the same way, seemingly a series of interesting ideas that are briefly sketched out. But that's not totally the case, the first track being the highlight of the two albums, the most complete of all the tracks: beginning with a pulse played by the horns it then breaks down into a cacophony of shouts, threatening to spin away from its centre but finally managing to hold together. But the other tracks are relatively minor: there is a Sun Ra singalong (Outer Spaceways, Inc.) and a series of tracks that highlight Sun Ra's keyboard playing, but there is not anything as interesting as Legend from the first album, the electronics often sounding a little too close to the background music for 1960s BBC science fiction programmes. But still, as with the first album, intriguing.