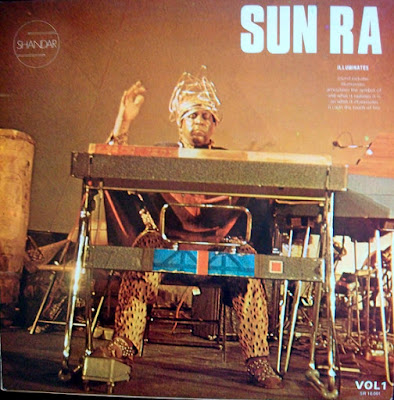 Nuits de la Fondation Maeght, Vol. 1 (1970) is the first of two releases capturing Sun Ra and the Arkestra at Saint Paul de Vence, Côte d'Azur, France, in August of 1970, on what was their first European excursion. As a rule, free and avant-garde jazz are a decidedly acquired taste. However, for discerning palettes, these installments present the aggregate at their absolute pinnacle in terms of performance and inspiration. The four works included here offer a wide variety of styles and approaches, proving that the combo were far more multifaceted and involved than often given credit for. "Enlightenment" is a suitable opener, featuring a vocal duet between June Tyson (vocals) and John Gilmore (tenor sax/drums/vocals). This ambles subtly into another brief lyric on "The Star Gazers," followed by an inventive and elaborate piano solo from Ra. The bandleader is clearly enthused throughout, translating in what is perceived as even quicker and more potent inflections. These continue during a full-ensemble reading of "Shadow World," which is given a worthy workout. The flurry and fury in Marshall Allen's alto sax are countered with more of Ra's highly intricate assertions. One of the most inspired keyboard performances from Ra is the appropriately titled "Cosmic Explorer." There are moments that vacillate from terrifying to sublime as the artist methodically investigates the sounds, carefully constructing his progressive arrangements. Much like the Arkestra presentation, Ra's solos are complex, more than making up for any lack of structure with a motivated performance. Enthusiasts should note that both volumes of Nuits de la Fondation Maeght were issued on CD from an excellent quality tape (read: non-vinyl) source on Comet Records in 2003.
Posted by Zen Archer at 12:06:00 PM