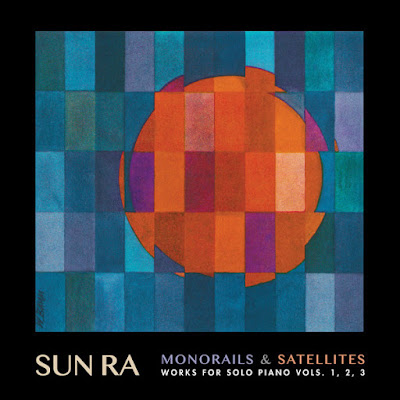 "I have always thought orchestra. I play that way, even when playing the piano." — Sun Ra

Monorails and Satellites were two volumes of solo piano works recorded by Sun Ra in 1966. Volume 1 was issued on his Saturn label in 1968, volume 2 the following year. They were the first commercial LPs of the artist's solo keyboard excursions. Vol. 1 featured seven idiosyncratic Sun Ra originals and one standard delivered in Sunny's singular manner. Vol. 2 consists entirely of original compositions. A tape of a third, unreleased volume was discovered posthumously by Michael D. Anderson of the Sun Ra Music Archive. Released here for the first time, it consists of five originals and four standards, and was recorded in stereo.

Despite Sun Ra's obsession with the future, Monorails and Satellites is something of a nostalgia trip. As a youth in Birmingham, Alabama, the man who became Sun Ra—Herman Poole Blount—spent hours at the Forbes Piano Company, amusing himself (as well as staff and customers) at the showroom keyboards. He practiced standards, emulated his piano heroes, played the latest pop songs, and improvised. The idyllic reveries which the teen experienced in those formative years were no doubt recaptured during the Monorails sessions.

The playing here speaks less of a style, and more of a collection of statements. Some of the tunes, with their odd juxtapositions of mood, could be mistaken for silent film scores. Perhaps they were audio notebooks, a way to generate ideas which could be developed with the band ("I think orchestra"). Regardless of any secondary (and admittedly speculative) intent, they serve as compelling standalone works. The fingering reflects Sun Ra's encyclopedic knowledge of piano history as his passages veer from stride to swing, from barrelhouse to post-bop, from march to Cecil Taylor-esque free flights, with a bit of soothing "candelabra" swank thrown in. Sunny's attack is mercurial, his themes unpredictable. His hands can be primitive or playful, then abruptly turn sensitive and elegant. As with the whole of Sun Ra's recorded legacy, you get everything but consistency and predictability.

The listener also experiences something rare in the Sun Ra recorded omniverse: intimacy. His albums, generally populated by the rotating Arkestral cast, are raucous affairs. With the Monorails sessions, we eavesdrop on private moments: the artist, alone with his piano. These are brief audio snapshots of what was surely a substantial part of Sun Ra's life, infinitesimal surviving scraps of 100,000 hours similarly spent, most lost to posterity.

Sun Ra as a pianist could be in your parlor, entrancing you with all manner of wistfulness, star-gazing, even a dash of the down-and-dirty via some dusty blues or off-kilter, angular, jagged afterthoughts. In this two-disc solo piano set, the nine selections that make up disc two bring it all back home, the music coalescing in sometimes strange and wonderful ways that, perhaps, give a more intimate look into the man's musical heart. Ending with an at-times dreamy then jaunty, rambunctious then mysterious visit to Jerome Kern's haunting "Yesterdays," Ra is, in a sense, looking back, feeling back. We are close.

Monorails & Satellites Volumes 1 and 2 were recorded in 1966 and released two years later. The subsequent but previously unreleased additional material from those sessions (Volume 3) are now included in this two-CD set. A three-LP edition is also available, both of which include liner notes from noted pianist Vijay Iyer, jazz historian Ben Young and producer Irwin Chusid.

Other visits include memorable takes on other standards such as "Don't Blame Me" and "Gone With The Wind." Like Thelonious Monk, Sun Ra's interpretations are highly idiosyncratic, full of personality even as they stay close to the melody. You know who the pianist is, what the song is, and you pretty much know where the music is going. Sort of.

That's always been the charm of listening to artists who kind of play it straight, but not really. And, like Cecil Taylor, Monk and Ra can be heard as pianist/orchestra conductors of their primary instrument. Everything is there. Nothing is missing. Virtuosos ... probably not; at least not in the Van Cliburn sense of the word.

Which is what makes packages like this so damn interesting. Sun Ra is known primarily as a bandleader and composer/orchestrator. And for good reason. His primary instrument, as with Duke Ellington, was the assorted groups of musicians he led over the decades. His work at the keyboard was secondary, whether electric or acoustically employed. And yet, some of the best passages on any of the various Arkestra titles comes when the band lays out and we get to hear the man do his thing, usually with basic rhythm accompaniment. The opening track to 1957's Sound Of Joy (Delmark), "El Is A Sound Of Joy, is a prime example. Ra's brief opening piano solo is the epitome of swing, mystery and joy. It's simple, evocative, ruminative, full of blues feeling. And, it's part of a give and take with another soloist (probably tenorist John Gilmore), not just a one-up, one-out. Humble and deep.

The thing about this piano music from Sun Ra that sticks to you like the salt off a favorite crunchy. It's non-virtuosic virtuosity. Like Ellington, Ra's piano brings you in. An amazing technique isn't the thing; it's the weirdness of something that feels very common, everyday.

Disc One is intimate in a different way. "Cognition" takes a choppier, attacking and unsettled vibe and follows it by way of a more familiar one with the serene, gentle "Skylight.," The earth and sky shift back and forth, in and out, up and down, the material not necessarily having anything to do with melody or conventional song structure. Think more exploratory, expansive, further dimensions of the piano, the piano as platform, a launching pad. And without all the bells and whistles. Not so much trippy as trip-like. Modest with outsized energies. Chords and lines within a certain tonality.

Some of the music might sound like thinking out loud, scattershot with nothing but a turnaround to show for it. The outward-bound, reverb-laden "Astro Vision" plays like a kind of cosmic/Outer Limits intrusion alongside Ra's more saloon-like ivory tickling. And one can only speculate as to what was going through Ra's mind on his manic-sounding juggernaut excursions through the nine-minute "The Ninth Eye" and "Solar Boats." But then, a seemingly wayward tune like "The Alter Destiny" suddenly becomes another parlor song of sorts, the followup standard "Easy Street" only enhancing what came before with it's gentle, relaxed stride and pretty melody, reminding us once again of Ra's deep roots in the jazz tradition.

Sun Ra the pianist was Sun Ra the Arkestra in miniature. Modest in magnitude.
Posted by Zen Archer at 1:46:00 AM