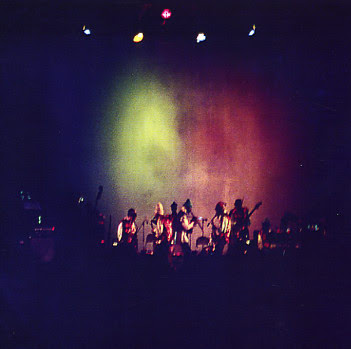 
The performance at Newport Festival is from July 3rd. 1969.

The performance at the Electric Circus, New York City is from early 1968.

The sound quality on Live at the Electric Circus/Newport Jazz Festival suggests the performances were recorded by a band or audience member on home equipment. Some tracks are untitled and the sometimes speculative personnel listings lack instrument identifications. However, the late '60s was an important period for the band: the New York milieu of experimentation tended to press the band's expressionist creativity while downplaying some of the theatrical elements. The 11 short tracks from the 1969 Newport concert are clipped and fragmentary, but it's a rare performance by the Arkestra in the heart of the jazz establishment, with some unbridled wailing by John Gilmore and Marshall Allen, spacey keyboard by Sun Ra and dense African-inspired percussion on "Watusa," as well as a few vocals like "Enlightenment". Let loose in the psychedelic ambience of the Electric Circus, the band responds with a more satisfying performance, including a 25-minute collective improvisation with some fine trombone work (likely Bernard Pettaway) and a reed blowout on "Calling Planet Earth" that's a musical highlight. It's worth seeking out, despite the sound.

The Sun Ra reissue train keeps on rolling, and most recently it has produced two albums that could not be more different. The Transparency label has been unearthing reams of never-before-heard concerts, and now it gives us a great double-CD: Sun Ra's set at the 1969 Newport Jazz Festival and a 1968 show in New York. Throughout the 1969 show, Sun Ra pierces the eardrums with his synthesizer noodlings while the band blows, grooves, and chants behind him. By Newport standards, this must have been anarchy. Several of the songs are "unidentified," and that's part of the charm. So is the fact that the list of personnel is shaky; the qualifier "possibly" appears before the lineup of musicians. "On Jupiter," which finally brings a gem to CD, is quite the opposite. Though it clocks in at under a half-hour, the album perfectly captures Sun Ra's band - identified here as the Intergalactic Myth Science Solar Arkestra - in 1979, negotiating the wide swath between postbop and funk. There are just three cuts: the brief title track; the long closer, "Seductive Fantasy," an unusually tender number that features Sun Ra playing beautifully on the piano; and the meat of the set, "UFO," where serious disco-funk takes over.