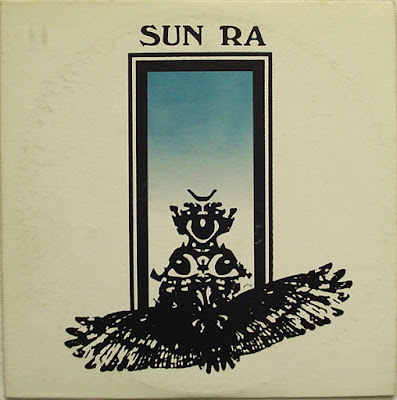 None of the Sun Ra discographies previous to Robert L. Campbell's 1st edition (1994) mentioned this version of the «What's New ?» album. Even the listing in Mr. Campbell's preliminary (to the 1st edition) discography (on which the discography on the Saturn home-page is based) known copy with one label orange, the other black. Since then, a few copies have been discovered, including this one. It is reasonable to assume that the copy here is the 1st original version, since both its labels are black «El Saturn» with the Chicago adress and the same «752» catalogue number and both sides have the «SRA 53275» matrix number. The labels give no track listing, only «Sub Underground Series … volume____». Side A has four tracks (What's New?, Wanderlust, Jukin' and Autumn In New York, recorded in New York in 1962), while the Side B has one single track, the cosmo-drama «We Roam The Cosmos» (named after the first exclamation following the fade-in of the end of Space Is The Place), recorded live in 1975. This track is unlike anything else in Sun Ra's discography : the band members are truly in trance and the energy unbelieveable … the vocals are occasionally overmiked / in the red

The cover is one with the eagle motif on the front and the Acropolis on the rear, the paper lightly textured. This is certainly the original cover of this particular edition, as I know a second copy exactly like this one.

The cover is quite clean and has virtually no surface-/ring-wear, only a hint of tanning and a few aging spots on the upper right corner, near the opening (see scan). On that same corner, there is a small sticker with a tiny photo of planet earth and a previous owner's name. The seams are fragile : they are split about ½" at the opening - also both the upper and bottom seams are split in the middle, but these, especially the upper one, are not so noticeable. So overall probably at least VG++. The vinyl is clean for a 30 year old LP and has only light and very superficial signs of having been handled and played (barely visible light paper-sleeve marks, ...). None have an impact on the LP's playing. This copy's pressing is quite nice by Saturn standards, but keep in mind that even an excellent Saturn pressing will play almost silently for much of the record but still have some surface noise in places (here quite mild, mostly at the beginning of each side). So overall EX to EX+. While in my posession, this copy has been kept in a poly-lined innersleeve, handled with great care and played only a few times on a high-end turnatable.