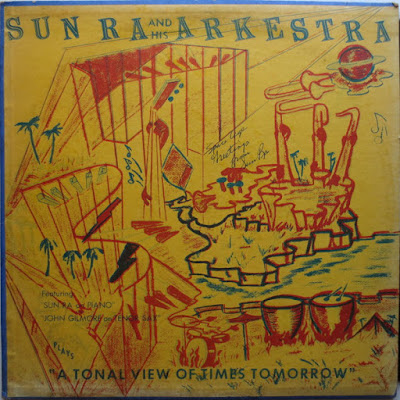 The CD starts out with the seventeen-minute "Space Probe," the first test recording of Ra on Moog synthesizer, recorded way back in 1969. This early electronic masterpiece is a gorgeous explosion of sound, a strangely beautiful mechanical flowering. According to the liner notes, the music reflects "a spaceship in outer space looking for a landing place." Certainly the song is that, but it's many other things as well: telepathic birds, machines discussing philosophy, video games playing video games — it's whatever you can hear. The magic of Ra on synthesizer is that even the most mechanical sounds have a strange warmth and beauty, and his innate musicality infuses the song with a satisfying cohesion. "Space Probe" is Ra at his experimental best, exemplifying his unique way of making people hear and feel in new ways.

"Earth Primitive Earth" and "The Conversation of J.P." are also from the original Space Probe. The former features the great John Gilmore on bass clarinet, and the latter features the great Marshall Allen on flute, plus Ra's joyful keyboards. Both tunes have spare, urgent percussion, exemplifying Ra's deep connection to African music as well as the burning political situation of the time. There are also five additional tunes, including two rare pieces with vocalist Thea Barbara: the tiny 47-second "Circe" and the longer "Recollections of There." Among the extra tracks, "Solar System II" is a particular pleasure; Ra's quirky dissonance on keyboards is reminiscent of Monk, but unlike Monk this tune is backed by raw, archetypal percussion, including cans, cowbells, and sticks.

So on one album, released 37 years ago, Ra explored the ancient sound of reeds and drums, and simultaneously reached forward into the world of machines. He was a man with an astoundingly broad vision, and he was never experimental just to be experimental: Ra's work was always part of a prophecy for humanity, a vision of love and unity that did not stop at our planet. Space Probe is yet another invitation from the great master to enter his vision, and possibly even make it one's own.

"A transition classic. Recorded mostly in the early ‘60s with Ra, Marshall Allen, John Gilmore, James Jacson, Nimrod Hunt and Thea Barbara, Space Probe explores stripped back forms and colour combinations that are far from jazz – or that attempt, very successfully, to take jazz into wholly new territories. Especially notable is the extraordinary Conversation Of J.P. for piano and percussion which, along with the opening track - an 18-minute Moog solo, probably recorded in 1970, just after Ra had newly acquired the instrument and was still putting it through its paces - make this an essential release in the Ra canon. As a whole, there is an impressive palette of ideas and experiments here, situating Ra at the heart of the musical revolution that was overturning orthodoxies in every field of musical endeavour at this time. The title track is notable as documenting Ra's early exploration (his first released) of the unworldly potential of a newly-acquired Mini-Moog –a prototype, in fact, given him by Robert Moog to test. Moog always claimed afterwards that he never understood exactly where some of those sounds came from – suspecting he (Ra) might have modified the instrument in some way."-Chris Cutler
Posted by Zen Archer at 2:57:00 AM