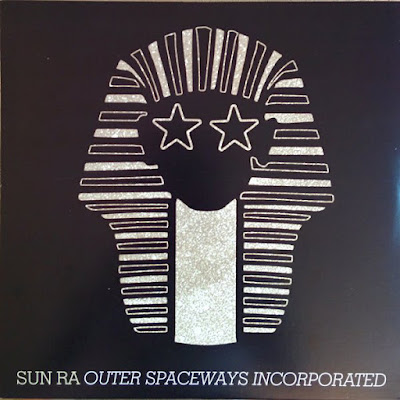 
You never know what you are going to get with Sun Ra: this was recorded live somewhere in New York in 1968, released in 1971 as Pictures of Infinity, later re-released as Outer Spaceways Incorporated, which was already the title of another 1970s Sun Ra album, so you can't even be sure what album you are listening to. And the music: listen to the long Somewhere There, it begins with a chaos of horns, hard core 1960s avant garde jazz, and then out of this primal soup comes Marshall Allan's alto, flipping and flopping like a fish on the beach, gasping for life, screaming out because it is living, then some pleasant drums come in, a relaxed interlude, but the drumming goes on for another 5 minutes before the horns scream in again and we wonder where this is going, but we go back to the drums for another 5 minutes and what we thought was a pleasant interlude in the aggressive assault turns out to be the main feature. So it is with the other tracks, they never do what they promise to do at the beginning, always changing directions, metamorphosing into something unexpected. And part of the weirdness is that it isn't all weird: the opening track could be a 1950s big band track with John Gilmore’s tenor sounding like 1950s John Coltrane. And all the way through the rhythm section is fairly conservative, Ronnie Boykins bass playing straight lines, as though it is pointing to clear paths through the dense undergrowth. (At times it sounds as though a mad professor was taken the rhythm section of the Jimmie Lunceford Orchestra and bolted the horn players from the Art Ensemble of Chicago to it.) This album is wondrous and extraordinary, but also somehow unsatisfying, spinning off into too many directions without finding any destinations..
Posted by Zen Archer at 2:26:00 AM