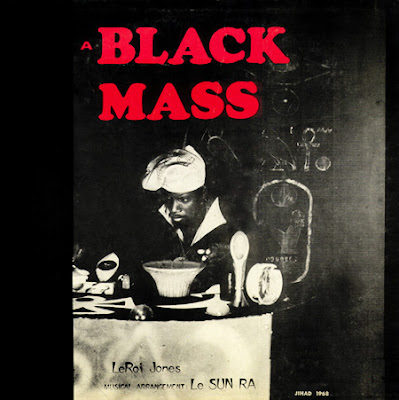 Originally released by Jihad Productions in 1968.

A Black Mass is a curious piece that was extremely limited when it was first released in 1968 on Leroi Jones' (Amiri Baraka) Jihad records. Recorded at Spirit House, Jones' house/theater in Newark, this live performance of Jones' dramatic piece dedicated to Malcolm X -- and to a lesser extent, the Nation of Islam -- would have originally only been found in black nationalist bookstores in a few cities. Fans of Sun Ra & the Arkestra may be disappointed, as Ra and company never play more than a few notes here and there. Unfortunately, it's difficult to make out certain key elements of the dialogue, obviously essential to grasping the full understanding of Baraka's play. This is more a historical literary piece than a musical one, just as worthy of serious examination, albeit with strained ears.

Originally issued in 1968, A Black Mass was personally distributed by Baraka via a network of radical Black literature bookstores and was not commonly found in the channels that records of the time moved in. As a result, it has enjoyed a mystical status for the better part of its 30+ year existence, and many hard-core Ra completists have never seen a copy. A strange and revolutionary play by Baraka, with musical interludes by the Myth Science Arkestra. Very, very historic. "The play A Black Mass was written in Harlem in 1965, much of it probably at my desk at The Black Arts Repertory Theater School at West 130th Street and Lenox (now Malcolm X. Blvd.). It was first performed at the RKO Proctors Theater, Newark as a companion piece to J-E-L-L-O, a satire on the Jack Benny show where Rochester turns militant. The reason it was Newark is because late in 1965, I decided to walk away from the BARTS because with the mounting internal strife, the phenomenon of 'diminishing returns' had set in so disruptively that the vision of bringing Black Art into the community and creating what we were later to understand as Cultural Revolution could no longer succeed at that venue. Black Mass shows the heavy influence of the Nation of Islam even though, after Malcolm's murder, I became alienated from that Nation, essentially as a means of registering my allegiance to Malcolm. Even the Jacoub story I had gotten from Malcolm when he was still more directly motivated by Elijah Muhammad's teachings. Sun Ra was one of the most consistent and supportive artists associated with the BARTS. He was there several days a week, teaching all who would listen. At any rate, when I conceived of doing Black Mass to music, Ra was the only musician in my mind. Not just because of the 'otherworldliness' of the tale, but the sensuous 'outness' I knew Ra, with his Myth Science Arkestra, would bring, which I felt would give a material life to the text. The work was recorded in The Spirit House, on the first floor theater we had created by tearing down the walls of my rented one-family house, just as we had done at The Black Arts. With Sylvia Robinson (Amina Baraka, a Newark artist who would shortly become my wife), Yusef Iman (a BARTS original), Newark's Marvin Camillo (he and Yusef are both gone now), and Barry Wynn (Amun Ankra), we tried to recreate the staged version which we had just done. And while there is something to be desired in our collaboration, the recording stands not only as a record of what The Black Arts was doing, but points I think into the future of the spoken word and the possibility of expanding what can be recorded and what kind of collaboration between word and music can come. The theme 'The Satellites Are Spinning' is the dramatic musical mise-en-scÃƒÂ¨ne throughout, though close listeners will hear some of the music which characterized the Myth Science Arkestra rising and falling through the mainly improvised music-drama. In total, the music is rich and evocative by itself. Heard with the text of The Black Mass, both connect and extend each other with a dramatic gestalt of Myth-Science music and the mythologized history deepens our emotional perception of what is being told. For me, re-heard with the benefit of study and another kind of thoughtfulness, it even projects a rationale that's more scientifically based, 'search-lighting' some evasive facts of human history as well as projecting the premise which I have long held, that art is creation, and that we must oppose the 'creation of what does not need to be created.' -Amiri Baraka, 9/6/99 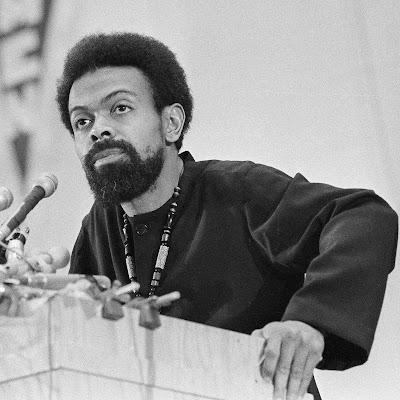 After graduating from Howard University (B.A., 1953), Jones served in the U.S. Air Force but was dishonourably discharged after three years because he was suspected (wrongly at that time) of having communist affiliations. He attended graduate school at Columbia University, New York City, and founded (1958) the poetry magazine Yugen, which published the work of Beat writers such as Allen Ginsberg and Jack Kerouac; he edited the publication with his wife, Hettie Cohen. He began writing under the name LeRoi Jones in the late 1950s and produced his first major collection of poetry, Preface to a Twenty Volume Suicide Note, in 1961. His first significant play, Dutchman (1964; film 1967), which recounted an explosive confrontation on a train between a black intellectual and a white woman who murders him, won the 1964 Obie Award for best Off-Broadway American play.

Following the assassination of Malcolm X in 1965, Jones became increasingly focused on black nationalism, That year he left his white Jewish wife and moved to Harlem. There he founded the Black Arts Repertory Theatre, which staged many of his works prior to its closure in the late 1960s. In 1968 he adopted the name Amiri Baraka, and his writings became more divisive, prompting some to applaud his courage and others to deplore sentiments that could foster hate. In the mid-1970s he became a Marxist, though his goals remained similar. “I [still] see art as a weapon and a weapon of revolution,” he said. “It’s just now that I define revolution in Marxist terms.” His work from this period was seen by some as becoming increasingly homophobic and anti-Semitic. His position as poet laureate of New Jersey was abolished after he published the searing 2001 poem “Somebody Blew Up America,” which suggested that Israel had prior knowledge of the September 11 attacks in the United States.
Among Baraka’s other works are Blues People: Negro Music in White America (1963), Black Magic: Collected Poetry 1961–1967 (1969), The Autobiography of LeRoi Jones/Amiri Baraka (1984), and the piercing Tales of the Out & Gone (2006), a fictional social commentary. Baraka taught at Columbia, Yale University, and, from 1979, at the State University of New York at Stony Brook, where at the time of his death he was emeritus professor of Africana studies. S O S: Poems 1961–2013 (2015) was a posthumous collection containing a wide selection from his oeuvre, including some previously unpublished verse.
Posted by Zen Archer at 10:00:00 PM