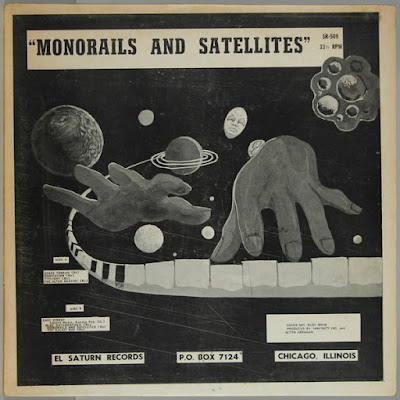 
More than a quarter-century after his death, there’s still a legitimate debate over whether Sun Ra was a genius or a charlatan. That question arises again with the reemergence of his slim body of solo work. His identity was so tied up in his big bands that an album of solo piano pieces seems shocking. Sun Ra (né Herman Blount) made these recordings in an unknown location, probably his home, on inferior equipment in 1966 (you can hear a telephone ringing on one track).

No one would ever mistake Sun Ra for Art Tatum or Erroll Garner, or even Thelonious Monk. His approach favors minor-key block chords, spiky notes, and jackhammer repetition. At times, one can almost hear him searching for the proper harmonizing chord, suggesting a deliberate nature that’s missing from both his synthesizer explorations and his swing-band deconstructions.

His originals incorporate blues, bop, balladry, and the avant-garde, sometimes all at once. The weirdest song here is “The Ninth Eye”: nine minutes of staccato chords and prickly clusters that start, stop, circle back on themselves, and rumble, with occasional suggestions that a blues might emerge. His renditions of the standards are melodically faithful, but he makes them his own rhythmically. The weakest of these, “Solar Boats,” is nothing more than five minutes of brutal banging around on a four-note motif.

Is Sun Ra’s larger-than-life persona the reason we enjoy this collection so much? If this were a new recording by a young pianist, would we dismiss it? Is this a great work of art or was Sun Ra putting one over on us? After repeated listens, these questions are still hard to shake.
Posted by Zen Archer at 1:35:00 AM