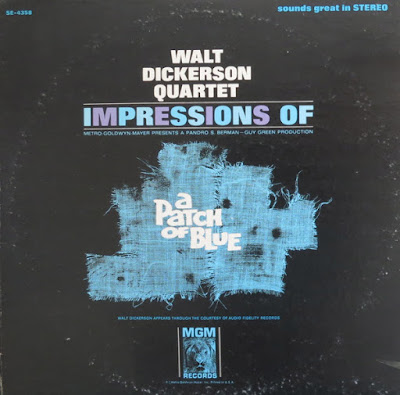 Recorded in New York City, 1965.
It is the last album Dickerson recorded before his decade long sabbatical from jazz before his comeback in the mid-1970s. The album is relatively mainstream considering the work of the contributing musicians. An interesting detail though, is that Sun Ra plays the harpsichord, an instrument rarely used in a jazz setting.

Impressions of a Patch of Blue was the second time Walt Dickerson recorded an album of rearranged movie soundtrack pieces, following his interpretations of material from Lawrence of Arabia. Starring Sidney Poitier, A Patch of Blue was about a star-crossed pair of interracial lovers, with the twist that Elizabeth Hartman's character also happened to be blind. More important to jazz fans, though, is that the album marked one of Sun Ra's extremely rare appearances as a sideman, playing both piano and harpsichord. And he turns in a masterful supporting performance behind Dickerson, putting his own indelible stamp on the proceedings without ever overwhelming them. Witness "Bacon and Eggs," where Dickerson repeats a melodic theme for most of the piece while Ra's unorthodox reharmonizations dance about in the background. Ra's harpsichord also provides some otherworldly cascades that seem to spark Dickerson's sense of freedom, particularly on part two of "A Patch of Blue" and "High Hopes." Dickerson's own playing is most evocative on the two parts of "Alone in the Dark"; during the first, he plays frantic, jittery phrases that mimic the speech patterns of panic, and in the second he favors quick, repetitive figures that fade away like echoes or unanswered calls for help. All of that is indicative of the level of imagination with which the project is carried out, which makes it a shame that Dickerson retired from performing for a full decade following its release, leaving Bobby Hutcherson to become the most important modernist vibes player of the latter half of the '60s. Verve's 1999 CD reissue of Impressions of a Patch of Blue was a very limited edition, so don't dawdle in picking this one up.
Posted by Zen Archer at 4:05:00 PM