The Sensational Guitars Of Dan & Dale
1966
Batman And Robin 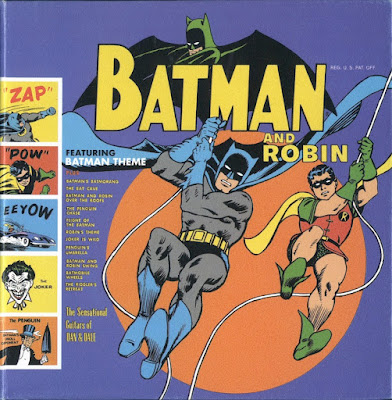 There is also an unidentified tenor saxophone on A1, A2, A3, B4, a female vocalist on B1 and several female vocalists on A1.
Detailed Information about the participating musicians from "The Earthly Recordings Of Sun Ra (2nd Edition)" by Prof. Robert L. Campbell and Christopher Trent (Cadence Jazz Books ISBN 1-881993-35-3).

Originally recorded by Tifton Rec. US 1966.

This novelty album, released in 1966 during the height of the Batman & Robin craze, was initially credited to the "The Sensational Guitars of Dan and Dale" and featured an album full of tracks based on the popular TV show like "The Batman Theme Song", "The Penguin Chase", and "The Batcave". The album is entirely instrumental, except for someone singing "Batmaaaan!" in the theme song. But the interesting thing about this album, and what makes it an absolute cult gem, are the musicians who are behind it all: basically a joint collaboration between Sun Ra's Arkestra and Danny Kalb's Blues Project (one of the first psychedelic rock bands as well as one of the world's first jam bands). "Dan and Dale" were actually blues guitarist Danny Kalb and Steve Katz (later of Blood, Sweat & Tears) on dueling guitars, while Sun Ra and Al Kooper take over organ duties (a Hammond B-3) and members of Ra's Arkestra play sax.

How's it sound? Cheesy to the max. Apparently many of the reviewers frown on cheese and it sounds like many are pretty unfamiliar with the Blues Project, a band I've liked since I got Cafe Au Go Go when I was about 17. Sun Ra I'm less familiar with but have been exploring him recently and when I saw this existed I immediately ordered it. I'm a big fan of Trane, Ayler, Miles, Monk etc as well as older stuff like Bird and Lester Young (big fan).

I imagine the Sun Ra people are looking down on this because of all the unstructured rock elements and the fact that the Sun gang isn't doing much for the most part. I'm almost all the way through it as I type. I guess the biggest disappointment is that John Gilmore isn't blowing much. Uh oh, here comes a medium tempo blues sort of like Honky Tonk. He got a little space but not much.

The improvising star here is Danny Kalb who is everywhere. I'm a big fan of those forgotten self-taught guitarists of the 60s with their own unique sounds who you could spot a mile away: Kalb, Bloomfield, Henry Vestine, Harvey Mandel among others. Kalb, as usual is frenetic and unpredictable and gets to crank it up. Unique instrumental voices are in short supply today in the blues, jazz and rock fields. It often sounds to me like people went to the same schools and learned the same scales and fingerings, Guitar Tech for the blues and rock guys, Berkeley for the jazz guys.

This really for Kalb fans, fans of 60s blues jams, fans of cheese, fans of maybe something like Songs In The Key Of Z or something like that. This isn't for the people into the heavier-thinking side of Sun or fans of post-bop sax.

I say lighten up and enjoy. Now if only Jimi had jammed with Miles and that got recorded. Serious Orgasm!