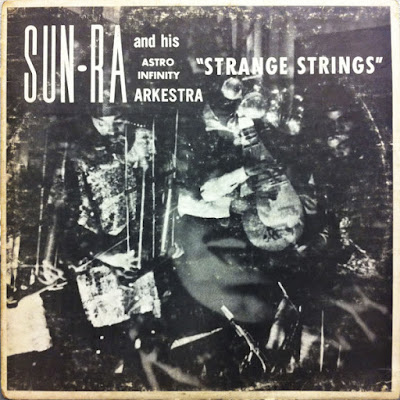 'Strange Strings is a somewhat legendary album from the mid-'60s. "Worlds Approaching" is a great tune, anchored by a bass ostinato and timpani and featuring several fantastic solos... Off and on throughout the tune, Bugs Hunter applies near-lethal doses of reverb, giving the piece a very odd but interesting sound. "Strange Strings" is one of those songs that is likely to inspire some sort of "you call that music?" comment from your grandmother, or even from open-minded friends. It sounds like they raided the local pawnshop for anything with strings on it, then passed them out to the bandmembers. It's difficult to tell if some of these instruments have been prepared in some way, or if they're simply being played by untutored hands. There are also lots of drums and some viola playing from Ronnie Boykins that is also treated heavily with reverb. Despite the cacophony, there is a definite ebb and flow to the piece and what seem like different movements or themes. Whatever you think of the music contained, there's no denying that it produced some of the most remarkable sounds of the mid-'60s. If you don't like "out," stay clear of this one.' Sean Westergaard[

After finishing a series of concerts of New York State colleges sponsored by ESP, Sun Ra decided to assemble a number of stringed instruments bought from curio shops and music stores. Ukuleles, Mandolins, Kotos, Koras, Chinese Lutes and 'Moon Guitars' were handed out to his reed and horn players in the belief that 'strings could touch people in a special way, different from other instruments
The point was that the Arkestra didn't know how to play them - Sun Ra called it 'a study in ignorance.

Marshall Allen said that when they began to record the musicians asked Sun Ra what they should play, and he answered only that he would point to them when he wanted them to start. The result is an astonishing achievement, a musical event which seems independent of all other musical traditions and histories.... The piece is all texture, with no sense of tonality except where Art Jenkins sings through a metal megaphone with a tunnel voice. But to say that the instruments seem out of tune misses the point, since there is no "tune", and in any case the Arkestra did not know how to tune most of the instruments...' John F Szwed

Fans of Sun Ra's Hard Space Bop and blues-based swing were in for a shock with Strange Strings (recorded in 1965—often erroneously reported as 1966—and released in 1967). This is an album without a genre, and demands an adventurous aesthetic on the part of the listener. Even in the eclectic and extensive Sun Ra catalog, Strange Strings stands alone.

After a series of concerts at upstate New York colleges, Sun Ra purchased an arsenal of stringed instruments from curio shops and music stores on the road: ukulele, mandolin, koto, kora, Chinese lutes, and what he termed "Moon Guitars." In the studio, these were handed out to his reed and horn players in the belief that "strings could touch people in a special way." That the Arkestra members didn't know how to play these instruments was not beside the point—it was the point. Sun Ra called it "A study in ignorance." To this unconventional "string section" he added several prepared homemade instruments, including a large piece of tempered sheet metal on which was chiseled the letter "X." Art Jenkins was assigned intermittent improvised vocals.

Biographer John Szwed explains what happened next: "Marshall Allen said that when they began to record, the musicians asked Sun Ra what they should play, and he answered only that he would point to them when he wanted them to start. The result is an astonishing achievement, a musical event which seems independent of all other musical traditions and histories. The music was recorded at high volume, laden with selectively applied echo, so that all of the instruments bleed together and the stringed instruments sound as if they, too, were made of sheet metal. The piece is all texture, with no sense of tonality except where Art Jenkins sings through a metal megaphone with a tunnel voice. But to say that the instruments seem out of tune misses the point, since there is no 'tune,' and in any case the Arkestra did not know how to tune most of the instruments."

The original LP version of Strange Strings was monophonic, contained three tracks, and suffered distortion in the mastering (perhaps due to the high-decibel studio performance and excessive reverb). However, at least part of the session was captured in stereo, and at least eight tracks were recorded (not including rehearsals), six of which are included on this remastered edition. No track titles appeared on the original Saturn LP cover, but the three released works were later identified as "Worlds Approaching," the LP title track, and an inversion of the title, "Strings Strange." However, the master tape box indicates the third title as "Strange Strange," the title we have used in this collection.

The LP track "Worlds Approaching," originally released in mono, appears here in clear stereo for the first time. Although there is no date on the previously unreleased "Thunder of the Gods" (found on a different tape, in mono), the style points to this work having been recorded around (and possibly even at) the same time, as the approach is identical to the Strange Strings concept.

The previously unreleased tracks "Cosmos Miraculous" (featuring Sunny on Clavioline) and "Moonshots Across the Sky" were discovered on other tapes (in mono), and also reflect the exploratory Strange Strings instrumentation. The bonus tracks complement this collection perfectly. There remains enough unreleased rehearsal material for another volume. Cosmic Myth Records plans an expanded 2-LP edition in 2018.

The stereo tapes for the tracks "Strange Strings" and "Strange Strange" could not be located, and while we had to rely on the poorly mastered LP versions, we have succeeded in rectifying some of the sonic flaws of the original pressing.

Emblematic of its title, this is one of the most unusual albums in the vast discography of visionary bandleader Sun Ra. In league with such classics as Heliocentric Worlds (ESP, 1965), The Magic City (Evidence, 1965) and Atlantis (Evidence, 1967), this obscure session focuses on similarly intense long-form improvisations. Originally recorded in 1966, Strange Strings is the culmination of Ra's most otherworldly experiments.

Pre-dating the comprovisations of Butch Morris and the game pieces of John Zorn, this is a classic example of Ra's conduction methods. With no rehearsal beforehand, ("a study in ignorance," Ra told his musicians) the results are surprisingly structured and spaciously uncluttered.

The only Sun Ra album of its kind, the title track and "Strange Strange" feature the entire Arkestra playing stringed instruments; ukuleles, banjos, mandolins, kotos, koras and more. In addition to the array of exotic strings, the ensemble features Art Jenkins uttering reverb-drenched mutterings, a huge sheet of tempered metal used as percussion, and a heady dose of intermittent reverb infiltrating everything.

"Strange Strings" and "Strange Strange" reverberate with dissonant texture and percussive clatter; the Arkestra eschews horns entirely, using the thrift store strings Ra acquired for them instead. Far less accessible than the opening tune, there is still a definite sense of episodic logic to these pieces. Similar instrumental groupings materialize with regularity, spurring on subtle shifts in sound. Punctuated by Jarvis' explosive percussion tirades, Ra's directorial hand in the proceedings is obvious.

Previously unissued, "Door Squeak" was recorded a year later. As the title suggests, it features Sun Ra playing a door with a squeaky hinge, accompanied by members of the Arkestra playing string instruments. Quieter, but similar to the previous cuts, it exudes a sparse alien sound-scape with Ra's hinge sounding uncannily Moog-like as it descends in pitch.

An anomaly even in the wildly unconventional discography of Sun Ra, this is a revealing listen for those interested in the furthest reaches of experimental music. For those unafraid to take the trip, Strange Strings will definitely take you places you have never been.
Posted by Zen Archer at 4:46:00 PM