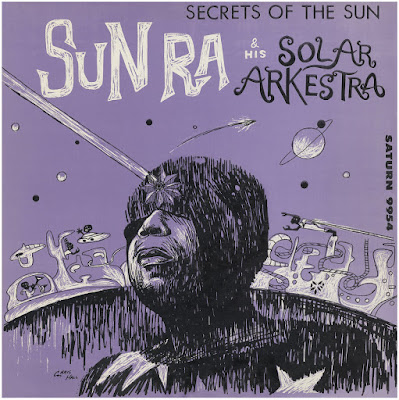 Secrets of the Sun is one of many Sun Ra albums which originated from sessions at the Choreographer's Workshop, a West 51st Street venue which served as the Arkestra's rehearsal space from roughly 1962 to 1965. The band rehearsed there endlessly, and more often than not an open-reel tape deck was running. These sessions produced tracks which (without organizing logic) achieved first commercial release on Saturn LPs throughout the 1960s and '70s. (Many unreleased tracks are first appearing on these post-2014 "Sun-tennial" digital remasters.)

Secrets of the Sun was recorded in 1962, but didn't appear on Saturn vinyl until '65. Per what had long been the bandleader's trademark, many titles point to destinations beyond Earth's stratosphere, while paradoxically echoing rhythms and forms inspired by Africa. And in what was a recurring motif of the Choreographer's milieu, the recordings themselves have a raw quality, replete with warehouse acoustics, distortion, erratic mic proximity, and a limited frequency spectrum. It's garage jazz. As on many of the Workshop sessions, drummer Tommy Hunter served as recording engineer, and his proto-psychedelic reverb saturates a few of these performances.

The album features an arsenal of percussion, often in the hands of Arkestra horn players, reinforced by the thumping bass of Ronnie Boykins. Sun Ra's developing Afrocentric consciousness inspired many of these relentlessly thunderous grooves. Despite the sustained pounding, there is a sparseness to most arrangements, fewer instruments in the mix, with piano often serving as counterpoint to the rhythmic clatter. It's less an orchestra than an expanded combo. There are few "genre" works on Secrets, and much less of what was conventionally considered "jazz" during Sunny's Chicago roost. New York, the artist's recently adopted hometown, was serving to liberate the composer's imagination.

Secrets marked the debut (on "Solar Differentials") of idiosyncratic vocalist Art Jenkins, who thereafter appeared sporadically on Saturn albums (and beyond) in cameo roles. As recounted in John Szwed's bio Space is the Place, Jenkins auditioned for Sun Ra as an R&B singer, but the bandleader rejected him because he wanted a singer who could achieve the "impossible." "The possible has been tried and failed," Sunny told Jenkins. "Now I want to try the impossible." Jenkins eventually chanced upon the technique of singing into a backwards ram's horn, creating a human wah-wah. "Now that's impossible," said Ra, and Jenkins got the gig as "space vocalist." Calvin Newborn's electric guitar on the opening number is a fresh sound; the band rarely worked with guitarists during this period. Several of these tracks — "Friendly Galaxy" and "Love in Outer Space" — became concert staples in years ahead.

This remastered edition contains the premiere release of the full "Reflects Motion" three-part suite, and one previously unreleased track from the session tapes, "Project Black Mass."

Marking a transition in its development between the advanced swing of the early Chicago-era recordings and the increased free-form experimentation of its New York tenure, this album also reveals the first recorded versions of two Ra standards, "Friendly Galaxy" and "Love in Outer Space." Accessible, yet segueing into vanguard territory, this album highlights a fertile period in the Arkestra's history. Looser and more aggressive than its Chicago recordings, these pieces find the Arkestra pushing at the limits of harmony and tonality.' Troy Collins

Solar Differentials introduced Art Jenkins, a new "Space Vocalist". Jenkins had sought an audition with Sun Ra a few months before the recording, and sang some rhythm-and-blues tunes for him. Sonny told him that he had a nice voice, but what he was looking for was a singer who could do the impossible ("The possible has been tried and failed; now I want to try the impossible"). Art came back one day when they were recording at the Choreographer's Workshop, and dead set on getting on a record somehow, rummaged through a bag of miscellaneous instruments looking for something he could play. But every time he picked up something, someone in the band would tell him to leave it alone. When no one objected when he pulled a ram's horn from the bottom of the bag he began to sing into it, but backwards, with his mouth to the large opening, so that it gave out a weird sound which he made weirder by moving his hand over the small opening to alter the tone. Sonny broke out laughing, "Now that's impossible!" and asked him to improvise wordlessly on the record.' John F Szwed,

If you're not familiar with Sun Ra's music or jazz in general this is probably not the album to start with (Sun Ra is VERY sensible to the contemporary listener and a great starting point for those who have never listened to jazz before and are more well versed in styles like rock and electronica). Those who are more familiar Sun Ra's music will find this album to be one of his more exciting collections. The first six tracks had me a bit puzzled, there seemed to be something missing from what I usually expect from a Sun Ra album; the big band banger: a track that really shows off the performers' abilities to play together. However, when I heard the first few bars of the ultimate "Flight to Mars" I knew immediately that Secrets of the Sun was going to provide me some closure in my need to hear an all out big band extravaganza. The unmistakably Sun Ra intro to this piece really approximates what it would be like to hear the band from Saturn as you walked by their rehearsal studio, street busy, on a hot summer day. In its anxious bowed string glissandos, folky modes and percussion instrumentation, and the banter buried underneath what is typically thought of as the "music" on a sound recording, it is truly a remarkable arrangement of sounds. Although only 43 seconds long it surely is one of the most exciting sections of this album.
The latter performances on "Flight to Mars" are just as exhilarating and to my ears they capture the euphoria of being on a journey with much time and space ahead of you - the knowledge that there is still, and will always be, fruitfully unexplored domains. This makes the piece somewhat autobiographical of the mission of Sun Ra and the Solar Arkestra in their music and their philosophy. (My evidence for this is that Secrets of the Sun is only 1965 and the Arkestra wouldn't go on to make Lanquidity [the most progressive album of all time] until fucking 1978). Under holistic assessment Secrets of the Sun really does have a lot to offer. The first six tracks are great in their own right. The compositions/improvisations are soaked in intriguing modulation and reverb and induce a visualization of outer space in all its loneliness and singularity. What's best about the comprovisational style of Sun Ra is that it's ever-transient; moving from one place very familiar to another that has not been seen as much. In essence this album was super inspiring and I highly recommend it to any avid listener.
Posted by Zen Archer at 10:08:00 PM