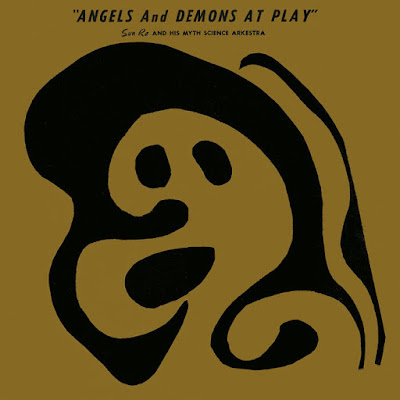 Angels And Demons At Play was compiled from two different sessions, recorded four years apart (1956 and 1960), that reflect Sun Ra's evolution from hard Chicago bop towards exotic styles that transcended easy categorization. The album was released in 1965 with a distinctive sleeve design by Sun Ra, featuring an identical illustration on both sides, and no sleeve notes. Besides the leader, there's overlapping personnel at the two sessions, yet the two LP sides were somewhat incongruous, demonstrating how much the Arkestra had evolved in four years.

Side A (tracks 1–4) consists of four performances from the marathon 1960 Chicago recording session that produced dozens of tracks released over the subsequent decade on a series of Saturn releases. Two idiosyncratic works, "Tiny Pyramids" and the title track (the latter featuring a flute solo by Marshall Allen), were composed by bassist Ronnie Boykins. "Between Two Worlds," a Sun Ra original, is a short, springy cha-cha. The colorfully abstract "Music From The World Tomorrow," featuring Sun Ra on Cosmic Tone Organ and Phil Cohran on "violin-uke," is the album's revelation — a short "sound experiment" rather than a composition, hinting more than any work on the collection Sunny's future direction.

The B-side of the album (tracks 5–8) goes back to the 1956 first Arkestra sessions, featuring Sunny's emerging "Hard Space Bop." The work is solid, and representative of the foundational years of the Sun Ra legacy. Three of the tracks had been released as singles by Saturn.

The respective sides document two early periods of Sun Ra's musical trajectory. But by the time the album was released in 1965, neither side accurately reflected what Sun Ra was offering fans on the concert stage or on new album releases, much less where his music would head as the decade continued to unfold. Compare Angels and Demons to the albums Strange Strings (recorded 1965) and Atlantis (recorded 1967-68), which sonically and stylistically are, as Sun Ra might say, "from another planet."

This album contains the moment when something 'happens' to the sound palette of the band. Following chronologically we might have come across frenetic but eccentric jazz from the same world as Monk and Mingus, as well as doo-wop, rhythm and blues and what almost might be called world music. But here we are confronted with ‘Music from the World Tomorrow’ – which is the most radical music labelled ‘jazz’ that I’ve come across from this time period (1960). Whilst there is a 4/4 pulse throughout, what goes on over the top can only be described as ‘free’ – although I’m pretty sure Ra himself didn’t like that label.

The first side comes across as fairly meditative and clearly forward thinking, although ‘Tiny Pyramids’ is in the same vein as pieces such as ‘Overtones of China’ from ‘Visits Planet Earth’ (1958). The title track features an addictive repeated bass line in 5/8, which was pretty unusual in itself for 1960 (apart from Dave Brubeck’s work from the year previous).

The second side is a particularly energetic outing from the classic early (May 1956) Arkestra lineup. This may be what’s known more traditionally as ‘jazz’ but the quirkiness of the arrangements and Ra’s piano playing surely shows that this is anything but ‘typical swing or bebop’.

Whichever side you listen to, Ra’s vision of music as a ‘sound of joy’ shines through. There’s just no room for pretentiousness here.

This album is split right down the middle for me. I adore every moment from the Angels' side, but can't bear a single moment from the Demons' side. Angels is amazingly original for a recording from this era, full of Egyptian and Arabic vibes, with a wonderful low-fi production. Demons on the other hand is exactly what you'd expect from this type of swinging jazz period, and does nothing for me whatsoever. Originally recorded as two separate sessions. I wonder how on earth, whoever conceived this album, thought the two recordings went together.
Posted by Zen Archer at 8:32:00 PM