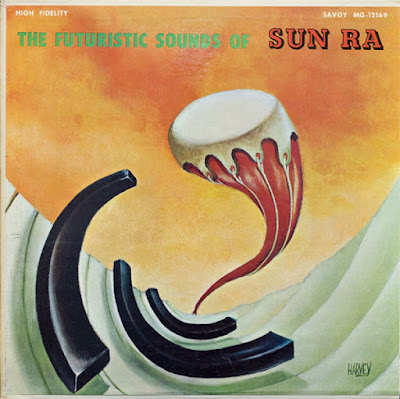 Another fine one from the early days in New York. One of the things so interesting about this session is not the increasing use of percussive action around the central themes, the regal, wordless vocals, or the outer space titles. For me, the interest lies less in the futuristic ideas than the sometimes eerie themes that evoke not outer space so much as ancient civilizations - "Ancient Aethiopia" as he'd have it. I hear long gone worlds, buried civilizations, music that brings to mind the creation of the great pyramids, etc. Utterly listenable from beginning to end, with the multi-reed and percussion-heavy interplay of "The Beginning" and the entirety of the vocal piece "China Gates" standing out most prominently. Things are helped immensely by the fine production values of Savoy (a surprising label for the Arkestra), though one would hope that in this age of reissues, they could find some new liner notes that do more than just explain (ca. 1960) why Sun Ra deserves to be heard.

Sun Ra stated that he wanted to create otherworldly emotions on this album. These emotions are “disguised as jazz,” to quote one of Ra’s poems. The Futuristic Sounds of Sun Ra, recorded in 1961, consists of a range of simmering, swinging, riffing tunes full of deft counterpoint. On the surface, these tunes show a rather restrained side of Ra and his Arkestra, yet below that surface lurk some unsettling emotions. Some might mistake those unsettling feelings for detachment, or worse, emotional vacuum. Not the case. The Arkestra instead presents on this album a collection of emotions that cannot readily be pinned down with a name.

To understand this idea, look no further than the song titles: “China Gates,” “Space Jazz Reverie,” “Of Wounds and Something Else,” “What’s that?” or “Tapestry from an Asteroid”. All of these titles evoke something unknown, something unfamiliar, pointing the listener to some unexplored place.

Next, we can look at his musical forms, in and of themselves familiar. “Bassism” riffs seductively with fragmented blues tones, but the sound stretches away from you, like the Arkestra is playing through the void of space. “Space Jazz Reverie” ostensibly sounds like a large-ensemble take on hard bop: mid-tempo swing, strange-but-not unheard-of intervals and a string of solos. But Ra’s comping on the piano generates an unsettling backdrop that keeps the tune just slightly out of balance- dense chords want to become clusters of sound, harmony and melody begin to merge with rhythm. After the solos comes a bizarre bridge where Bernard McKinney’s trombone and Marshall Allen’s alto sax weave together two disparate themes, only to arrive again, resolved, in the head arrangement. You can also hear this approach on “Jet Flight,” “What’s That?” and “Where’s Tomorrow?”.

“Looking Outward” builds on a familiar Afro-Cuban rhythm, but it is only skeletal: merely the idea of Afro-Cuban. The Arkestra adorns it with a trance-like flute figure and a distant, yearning bass clarinet drone. “The Beginning” and “New Day” mutate the Afro-Cuban motif in a similar fashion, retaining Ronnie Boykins’ sharp, cyclic bass lines, and now adding high-pitched bells, crying horns and an even richer bed of percussion. The familiar becomes unfamiliar, and hence, something new and exciting.

What exactly are these new, otherworldly emotions? For me to try and pin it down for you would be go against the grain of what the music is trying to say. We all have to find out for ourselves. Personally, The Futuristic Sounds of Sun Ra sounds like the imagination at work, and from where I am sitting, that makes a beautiful sound.

Sun Ra's only release for the Savoy label is a gem. Recorded in October of 1961, this is probably the first recording the Arkestra made after arriving in New York. As such, you're dealing with a smallish Arkestra (seven main instrumentalists, joined by vocalist Ricky Murray on "China Gate") that's still playing the boppish, highly arranged music characteristic of the Chicago years (1954-1961). Ra sticks to acoustic piano for the entire session, but various percussion instruments are dispersed throughout the band, giving a slightly exotic flavor to some of the tunes. John Gilmore plays bass clarinet on a couple tunes (as well as some great tenor solos), and Marshall Allen's flute playing is excellent, as always. This album was produced by Tom Wilson, who also produced the first Sun Ra LP, Jazz by Sun Ra (1956) for the Transition label, later reissued by Delmark as Sun Song (Wilson later went on to sign the Mothers of Invention to Verve and "electrified" Bob Dylan). With the exception of "The Beginning," all the tunes are very accessible. This is one to play for the mistaken folks who think the Arkestra did nothing but make noise. Excellent.
Posted by Zen Archer at 8:40:00 PM