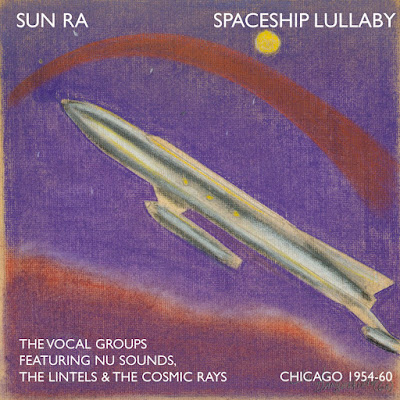 Subtitled "the vocal groups - featuring Nu Sounds, The Lintels & The Cosmic Rays. Chicago 1954-1960".
Part of Atavistic's Unheard Music Series. A compilation of obscure recordings from the mid-1950’s, featuring Ra’s work with several vocal ensembles from the period. The recordings were not well documented at the time of recording, so not all the musicians featured on this release are known...
Tracks 1 to 17 and 18 to 22 are home recordings, circa 1955.
Tracks 23 to 30 are home recordings from the mid-50s.
Tracks 31 to 37 are rehearsal recordings, circa late-50s to 1960.

Fifty years ago Jimi Hendrix dismissed "Heroes and Villains" as "psychedelic barbershop music".  It's 2019 and people are still making the same criticisms of vocal and harmony-based music.  I think it's high time doo-wop came in for a re-evaluation, and this is just the place to start.  These rehearsal recordings, although like many Sun Ra records suffering from poor sound quality, are both soulful and sophisticated, and are great in their own right as well as providing insight into the roots of Sun Ra's music-craft and cosmic philosophy.  From that perspective, the best track is the opener and title track, which featured musical motifs that would later appear in "Interplanetary Music" and "Rocket #9".  But the arrangements of vocal and jazz standards of the day are equally inspired and engaging, and are worth a listen, although not everything here is up to the same standard, admittedly.  Probably my favorite track on the album, "Black Sky and Blue Moon", appears in two versions, although disappointingly both are of subpar sound quality compared to the bootleg tape of the composition I have from a 1987 WKCR Ra marathon.  It is both haunting and deeply unconventional, even, yes, otherworldly, on a par with Secrets of the Sun, and showcases Ra's melodic gift at its best.

Evidence Records' Singles collection was the first inkling for many that Sun Ra had rehearsed and led vocal groups during his Chicago phase. Now Atavistic is shedding considerably more light on the subject with the release of Spaceship Lullaby, a collection of rehearsals Ra held with the Nu-Sounds, the Lintels, and the Cosmic Rays. The first batch of tunes are the Nu-Sounds with Ra on piano and Robert Barry on drums. Barry demonstrates once again what a masterful drummer he is, and listeners are treated to three previously unheard Sun Ra compositions: "Spaceship Lullaby," "Black Sky & Blue Moon," and "Chicago USA." "Spaceship Lullaby" contains lyric fragments that would later be incorporated into both "Rocket No. 9" and "Interplanetary Music," and "Chicago USA" was written as an entry in a contest to come up with a new official song for the city (it should have won). The Lintels sound like a considerably less professional group, and it is unknown whether Ra worked with them beyond this session. There's another set with the Nu-Sounds and just Ra on piano, but the best is probably saved for last with the Cosmic Rays rehearsing with the full Arkestra. There's a bit more distortion on these tracks (the rest sound remarkably good for home rehearsals), but it's worth hearing if only for the vocal version of "Africa," which appeared on Nubians of Plutonia. There are some flaws in the tapes, but given the rarity of this material, that's a minor quibble. Sun Ra fans will be thrilled that this material exists at all to be heard, and the chance to hear Sun Ra giving directions is like a peek behind the curtain. Excellent.

Taken on its own terms, Spaceship Lullaby accomplishes its goals, shedding further light on Ra’s only previously rumored work guiding various vocal collectives. As precious little aural evidence, save for two singles, has come to light, Ra’s vast universe continues to expand with this collection of fresh material. He is heard working in rehearsal settings with three ensembles: the Nu Sounds, The Lintels, and The Cosmic Rays. The sessions are loose and the sound quality is far from optimal; the selections focus on the “pop tunes of the day” – jazz standards, boogie woogie and early R&B – with varying degrees of success. The draw, though, is clearly Ra’s piano and the few tracks with the Arkestra, as the vocal groups range from neophytes to moderately talented performers.

The first seventeen tracks, as well as a second set of eight, feature Ra (with drummer Robert Barry on the first set) backing the Nu Sounds, a quartet lead by his friend Roland Williams. The highlights include the opening cut, “Spaceship Lullaby,” a swinging number with humorous, space-centric lyrics, as well as the two versions from a City of Chicago contest, “Chicago USA.” However, “Stranger In Paradise” is cosmic schmaltz at best, a description which also categorizes the second relatively rigid and forgettable set of tracks. Likewise, the commonplace doo-wop sounds of the Lintels (tracks 18-22) present Ra with essentially a collection of novices. Worth hearing, though, for Ra nuts, is the way in which Ra works with these youngsters.

The strongest tracks are the last seven, which feature Ra with the Arkestra and the Cosmic Rays. From the outset, the vocal quartet demonstrates its potential with the full band on “Africa,” although several tape splices diminish the full experience. “Somebody’s In Love” and “Black Sky & Blue Moon” present the group in a pop mode, the former featuring the Arkestra’s subtle colorations. Perhaps saving the best for last, the full Arkestra versions of “Honey” and “Come Rain Or Come Shine” are valuable, the latter featuring expressive opening words from Pat Patrick.

While Spaceship Lullaby is quite a discovery, in the end the target audience is certainly not newbies – and Ra fanatics are likely the only ones who will find lasting value here. This music exudes a perverse sense of joy and offers a welcome snapshot of both Ra’s development and the depth of his musical cosmos.