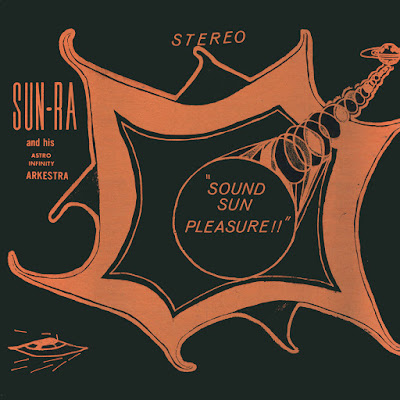 Sound Sun Pleasure was recorded in Chicago at the same March 1959 sessions that produced the instrumental album Jazz In Silhouette, and features near-identical personnel. However, the recordings sat on the shelf for over ten years, finally achieving release in 1970. Whereas Silhouette was comprised of Sun Ra originals, Sound Sun Pleasure explores two works Sunny co-composed with trumpeter Hobart Dotson and four standards, two of which ("'Round Midnight" and "Back In Your Own Backyard") are sung here by Hattie Randolph (or "Hattye," as her name is spelled in Saturn LP credits), whose soulful delivery enhances the uniqueness of this recording date. As a collection of mostly familiar tunes, the short (about 25 minutes) album serves as an accessible introduction to the maestro's music for those likely to find his experimental and avant-garde work difficult to embrace.

The 1950’s were a creative and transitional period for Sun Ra and other Chicago jazz arrangers. It was during this period that Quincy Jones emerged as staff arranger for Mercury Records. Sun Ra was one of his local contemporaries, arranging for large and small bands led by mainstays like Fletcher Henderson and Red Saunders, as well as for R&B and doo-wop ensembles. While Sunny did not have the chart-topping success of Jones (who crossed over into the pop market), he was highly sought for his sophisticated and increasingly idiosyncratic jazz-tinged arrangements.

Tenor saxophonist John Gilmore's and baritone saxophonist Pat Patrick's solos give the arrangements the Chicago “Hard Bop” feel. The set displays Sunny's gentle side with a moving rendition of Thelonious Monk's classic "'Round Midnight," while the Sun Ra/Hobart Dotson collaboration "You Never Told Me That You Cared" unfolds as a majestic ballad before a sudden tempo acceleration at its midpoint. The instrumental "Enlightenment" is the same recording that appeared on Jazz in Silhouette. The reason for its overlapping appearance is unknown, but we're presenting Sound Sun Pleasure as Ra released it.

The first half-dozen cuts on Sound Sun Pleasure (1970) are thought to have been documented between 1958 and 1960, during Sun Ra and his Astro Infinity Arkestra's residency in Chicago. Although Ra's arrangements are as intricate and involved as any from the era, the song list draws heavily upon standards. That said, it might be recommended as a starting point for parties not acclimated to the artist's later and exceedingly aggressive free and avant-garde leanings. Hatty Randolph (vocals) joins the combo for a pair of refined vocals on the covers of "'Round Midnight" and "Back in Your Own Backyard." The Arkestra complement Randolph's full-bodied delivery with such finesse, it is a wonder there isn't evidence of more frequent collaborations like this. She adds a bluesy melancholia that nicely offsets the instrumentation. "You Never Told Me That You Care" -- co-written by Ra and Hobart Dotson (trumpet) -- stunningly demonstrates Ra's unmatched scoring and superlative sense of melody. The sweeping and languid tempo allows the tune to unravel organically. "Enlightenment" -- another co-composition by the pair -- is slightly more indicative of Ra's complex approach, as well as the style that would inform his later work, noted by the band's stridency around the comparatively progressive harmonics. When Sound Sun Pleasure was issued on compact disc in 1992, an additional seven selections were included. Chronologically, they are among the earliest known from Sun Ra, recorded at various times and locations between 1953 and 1956, yielding understandably sporadic sound quality. "Deep Purple" -- from a session held in Ra's apartment -- features contributions by Stuff Smith, while Wilbur Ware (bass) duets on an emotive "Can This Be Love." Arthur Hoyle (trumpet) makes one of his first Arkestra appearances on the bouncy post-bop original "Dreams Come True" that also sports a rare Clyde Williams vocal.
Posted by Zen Archer at 2:30:00 AM