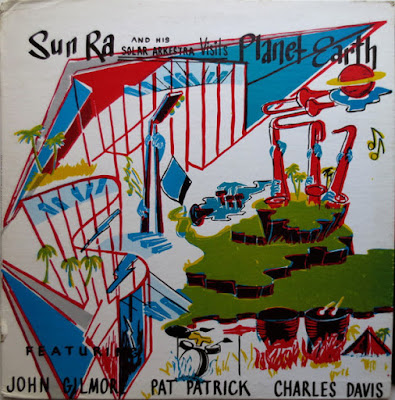 Sun Ra Visits Planet Earth was compiled from two studio sessions recorded from 1956 to 1958. Befitting the title, the A side of the LP presented a mystic travelogue in which the band descended on “Planet Earth,” time-traveled to the Garden of Eden to encounter “Eve,” and then zoomed to the Far East to explore "Overtones Of China."

The side B tracks were recorded in 1956 and represent some of the first Arkestra sessions, showcasing Sun Ra's emerging Hard Bop Space Book. These sessions were produced by Tom Wilson for his Transition label, and many tracks were issued in 1968 under the album title Sound of Joy by Delmark. Planet Earth, which coupled tracks from the two unrelated sessions, was commercially released on Ra's Saturn label in 1966.

Planet Earth's title track is a different take than on Sound of Joy, and appears here for the first time in stereo. "Overtones of China" is a radically different (and longer) arrangement than the Sound of Joy version. "El Viktor," "Two Tones," and "Reflections in Blue" are the same takes as on Sound of Joy, but Planet Earth's 2014 digital transfers from the master tape offer greater clarity and higher fidelity. Planet Earth's "Saturn" is eight seconds shorter than on Sound of Joy because on the Delmark reissue, the tape machine ran noticeably slow, causing pitch problems. These flaws were avoided for this digital release. Before its inclusion on Planet Earth, "Eve" had not previously been released, but dates from the Wilson sessions.

An alternate view on the pieces offered on (the later released) Sound of Joy, and one that sounds like a more cohesive album in this incarnation. Here the sides are more sharply divided up between the more idiosyncratic Ra compositions on the A side, and the more typical swing/be-bop based, albeit presented through Ra's inimitable style, on the B side.

The late '57 re-recordings of Planet Earth and Overtones of China aren't necessarily better than the Sound of Joy (December '56) versions, just different. Marshall Allen is now in the band and his flute adds an extra dimension to proceedings. Eve is an unused piece taken from the Sound of Joy sessions, and showcases Ra's rather classically-leaning piano improvisations.

The second side swings from start to finish, and is much more what you might expect from a 'jazz' record. All the soloists shine and is a bit of a romp, truth be told. These four pieces can all be found on Sound of Joy, but the different order here really helps - the energy level just keeps on rising. On a personal note, I think the absence of the rather lethargic 'Ankh' really helps matters!

Sun Ra Visits Planet Earth is another one of the great albums dating to the Chicago period in the mid- to late '50s. Assembled from two recording sessions, Sun Ra Visits Planet Earth is an excellent snapshot of this early period. The first four tunes are all from the earlier session (1956) and feature the Arkestra playing what might strike many listeners as fairly conventional material. The remainder of the tunes are from a 1958 session, and show the band moving away from straight bop and swing towards a more unique sound using much more prominent percussion and an increasing use of dissonance, along with instruments like solar bells and space lute. Most of these tracks were recorded a number of times in the '50s (check Sound of Joy), but arrangements and players vary from take to take. This album is a good example of how the Arkestra sounded just prior to (figuratively) blasting off into outer space.