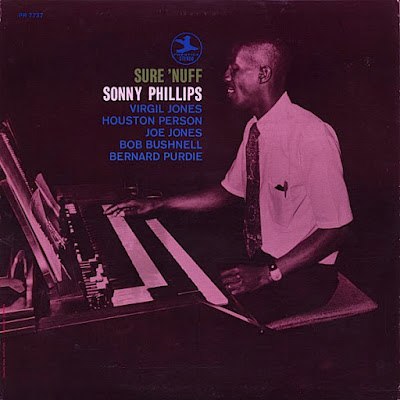 Organist Sonny Phillips was born in Mobile, Alabama in 1936 to a musical family, but did not begin his jazz education until the age of 23, when he began studying with Ahmad Jamal. The music of Jimmy Smith inspired him to switch to the organ, and soon he was performing with soul-jazz greats such as Lou Donaldson, Eddie Harris, Houston Person, and Gene Ammons. Phillips debuted as a leader on the 1969 Prestige set Sure 'Nuff, which was followed by the 1970 dates Black Magic and Black on Black. He returned to recording as a leader for the Muse label in 1976 with My Black Flower, but the next year's I Concentrate on You proved to be his final recording as a leader. After an illness in 1980, Phillips moved to Los Angeles, where he occasionally taught, performed, and recorded as a sideman during the years to follow.

The debut set as leader by organist Sonny Phillips is refreshingly free of the usual clichéd funky licks copped off Jimmy Smith and Brother Jack McDuff albums. Very early in his career, the Alabama-born, Chicago-based Phillips trained on piano under Ahmad Jamal, and Jamal's characteristic style remains imprinted on Phillips' loose, easy-flowing solos. (There's a little Ramsey Lewis in there as well, especially on the swinging soul-jazz title track.) This lighter touch and less blues-dependent style gives Sure 'Nuff an intriguing and unusual sound that keeps it from sounding like just another soul-jazz album. At times, Phillips sounds like he's been listening to jazz-rock pioneers like the Al Kooper-led Blood, Sweat & Tears or even the very early (pre-wimpy) Chicago, because tracks like "Be Yourself" and "The Other Blues" subtly integrate rock backbeats and rhythm guitar into jazz forms. Sure 'Nuff isn't an undiscovered masterpiece or anything, but it's considerably more interesting than the average soul-jazz album from the late '60s.

This is probably the best album ever cut by one of the lesser-known Prestige jazz funk organ players – and it's got a nice group that includes Virgil Jones and Houston Person, along with Ivan Boogaloo Joe Jones and Bernard Purdie. The title cut – "Sure Nuff, Sure Nuff" – is a monster groover, and the album's got some other nice ones
Posted by Zen Archer at 6:40:00 PM