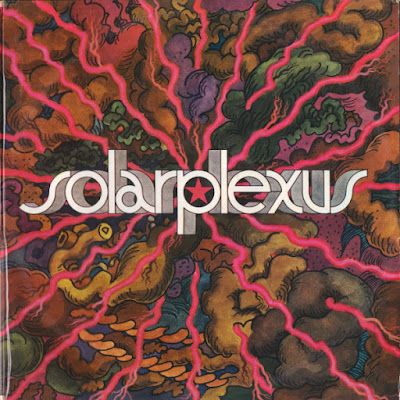 
This is the debut double album from Sweden's SOLAR PLEXUS released in 1972. The band featured the drummer and guitarist from MADE IN SWEDEN along with vocalist Tommy Korberg who was very well known in Sweden, as well as Monica a very accomplished keyboardist and vocalist and finally Carl-Axel also on keyboards. You know I was reminded of "666" by APHRODITES CHILD not because the music is at all similar or that both are double albums but because this is unique and all over the place and for some strange reason I'm blown away by it all. I have the English version which I'm thankful for because the vocals are not forced and I detect no accents.
"Bouillabaisse" is one of many standout tracks on this recording. The electric piano, drums, bass and organ sound amazing to start and the guitar joins in before a minute but it's brief. It settles down and the contrasts will continue. Some cool bass lines in this one and the guitar does return late. "A Polka For Orsa" is less than a minute of flute. "My Song Is For Her" is my favorite. Tommy on vocals kills this and he reminds me so much of another Prog vocalist that I can't put my finger on and it's been driving me crazy. The lyrics are so meaningful in this smoky, jazzy tune and I really dig the guitar style. I can play this over and over. "Loveliness" sounds pretty amazing with all the atmosphere with the cymbals clashing slightly and the bass and flute. Beautiful stuff. It's slowly building and the guitar becomes prominent after 4 minutes. It calms right down before 6 minutes like the beginning right to the end. Great track!

"Wallenberg" is one of those songs that you have to move to, so catchy with those vocal melodies. Check out the distorted keys before 2 minutes after the vocals stop. So good as drums and pulsating organ support. A change 3 1/2 minutes in as it settles down and male and female vocals arrive. This reminds me of Canterbury even the humerous lyrics. It kicks back in with those vocal melodies around 5 1/2 minutes. "The Eye Of Odin" has shimmering keys, bass, percussion and a relaxed horn. Gorgeous sound here. It does pick up and turn fuller but not by lot. Piano to the fore after 3 minutes as the horn stops temporarily. "Like A Spinning Sun" opens with piano and I think Spanish guitar as Tommy comes in on vocals. When it picks up at 1 1/2 minutes it's so catchy and uplifting. It's like this band has a gift for being melodic and funny and experimental, they do it all so well. I like the pulsating keys and the guitar after 2 1/2 minutes. Back to the opening soundscape after 3 minutes.

"Concerto Grosso For Pop Group And Symphony Orchestra" is the over 23 minute orchestral piece with an actual orchestra helping out. I'm not really into orchestral music but they add enough "Rock" elements to keep me happy. I like the bass after a minute and the picked guitar and flute around 3 1/2 minutes all while the orchestral sounds lead the way. A change before 7 minutes as the orchestral stuff stops and drums and organ lead the way. Check out the bass solo 8 minutes in then the organ leads as the brass and strings come and go. It turns classical before 10 minutes then the drums and distorted keys join in. Nice. A drum solo is fairly brief then the strings return after 11 minutes. Guitar around 14 minutes. A change after 18 minutes as the guitar stops and strings take over. Dual keys only before 19 1/2 minutes then it kicks back in to an orchestral mode at 20 minutes with bass and piano too as drums follow. Many aren't thrilled with this suite but it adds to the charm in my opinion.

"Phrygian Samba" is another killer track with bass and electric piano to start as drums and more join in quickly. Great sound! Guitar joins in before 2 minutes. Catchy is the word. "Think When We Live All Together" is another silly song sounding like it's out of the thirties or something especially the male and female vocals that are channeling that vibe. The laughter to start the song is a clue what's to follow. Piano support the vocals. "They're Building Their Cities" is another memorable song that opens with mono- tones female vocals and an experimental backdrop bring RIO to mind right away. It does change before 1 1/2 minutes as it picks up with drums, organ and bass as the male vocals join in. Electric piano too. An instrumental break before 3 minutes and the guitar joins in as he starts ripping it up. Male vocals are back after 4 1/2 minutes then it ends like it began. "A Real Goodun'" is the jazzy closing number with bass, drums and organ leading the way as the guitar joins in around 2 minutes.

Sure this isn't perfect just like "666" isn't perfect but I'm a sucker for electric piano and it's played by two of the members so it's prominent, but also the talent that is featured in this band just boggles my mind. The compositions, playing and singing all clicked with me from the very first listen.
Posted by Zen Archer at 2:45:00 AM

Email ThisBlogThis!Share to TwitterShare to FacebookShare to Pinterest
Labels: Made In Sweden, Solar Plexus, Sweden