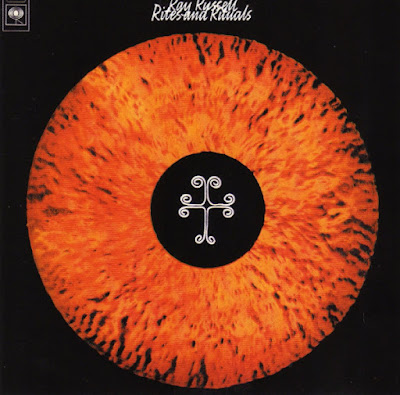 Two years after the release of Dragon Hill, Ray Russell had completely rethought his approach to jazz and free improvisation. The only remaining member of his quartet was drummer Alan Rushton, and added were the horn section of Harry Beckett, Nick Evans, and Tony Roberts from the four-piece choir that were featured sporadically on that album. Rites and Rituals focuses solely on exploration and power. The only player holding the floor in this new band was bassist Daryl Runswick. Russell was into playing the hell out of his guitar, employing effects combining scales in angular, edgy ways and trying to undo the notion of time. Rushton never played slower than double-time on anything, and often threw all notions of tempo and meter into the dustbin to make room for a "pure rhythm," one that danced alongside a soloist rather that provided his pulse. Inside the line was the deep funk groove that the horns created and Russell painted with fat, stabbing chords. Evans used his trombone like Maceo Parker played a saxophone. As the groove reached a fever pitch, as it did on "Sarana," the tune broke apart and evolved into a series of spacious yet frantic solos complete with studio distortion. On the title track, Roberts' whispering flutes and shifting timbres from Russell's heavily reverbed guitar create a spacious tension that is tread upon, lightly at first, by Rushton and Runswick, and answered harmonically by Beckett and Evans. They build chord structure and harmonic sequence in order to open a tonal space for improvisation by everyone simultaneously. Once it's open, it is explored tenuously at first, and then with the anger that only that era could produce. Each tune here -- there are four -- is a journey into that anger and into the question of how improvisation could engage jazz but be free of its historical entanglements, and was there a way to extend the boundaries of rock music, whose visceral power was enviable but presented a limited palette of expression. Rites and Rituals is an awesome exercise in the joy of freedom and a wonderful example of the changing face of electric jazz as it more fully embraced rock and funk's vocabularies.

If Russell was never a conventional man in his solo career, albums like Rites And Rituals can still be accessed by some classic fusion fans, but even it will lose quite a bit along the way. Featuring a few British-jazz stalwarts, like Nick Evans, Harry Beckett or bassist Runswick, Ray Russell certainly decided to challenge once more whatever few followers were still following his musical explorations. Adorned with a stupendous and well-justified artwork, R&R was recorded in the summer 70, but not released until the following year on the Columbia UK label

Opening on the 13-mins+ fiery red-hot fusion of Sarana, R&R gets off to a solid “rock” start, with some incendiary guitar and wild brass answers, the whole thing not being too far from Nucleus, despite a propensity at showing-off a bit, and tends to hesitate between mayhem and total chaos towards it end. The just-as-long title track is even further “out there”, often flirting with total dissonant improvs and despite an almost-normal passage at the 9-mins mark (before Rushton’s drum solo) and an accessible end, this is a tough track to “dig” or “get”. Opening the flipside, some bowed-bass drones warn you that you’re not yet through your cosmic nightmare, the 15-mins Abyss will indeed bring you into the depth of insanity, wondering how to escape from the infernal lave spewing out of your speakers, but you should come out enriched from the experience. The short (well everything relative, with its 5-mins duration) Cradle Hill will climb up another rung on the weirdness scale, but by that time, you should be either used to it, popped the album away or have left the room. Most likely one of the two latter options.

Well, I’d be very careful recommend this relatively excellent fusion quagmire, because only a few of the more adventurous free-jazz-heads or RIO freaks will probably appreciate it to its mind-challenging value. To be honest, I don’t always manage it myself and it’s definitely not the type of album I’d listen to more than once or twice a year.
Posted by Zen Archer at 5:01:00 AM