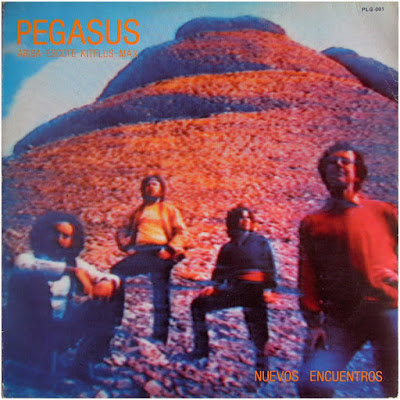 Pegasus was THE Fusion supergroup of Spain with a high-octane line-up, which comprised of former Iceberg bandmates Max Sunyer (guitar) and Josep Mas "Kitflus" (keyboards), ex-Fusioon and Tribu drummer Santi Arisa and bassist Rafael Escote from the legendary Gòtic.The band was found in Barcelona around 1981/82 and even established its own eponymous label to promote the discs.First in the row was ''Nuevos encuentros'', recorded in three different session at the Audiofilm Studios in Madrid and released in 1982.

This is a typical 80's Latin-colored Jazz Fusion album and not exactly what you'd expect from such a smoky line-up filled with talented and virtuosic players.Pegasus had taken a different path in this album compared to the members' past, it's more of an atmospheric Latin Fusion album with emotional plays than fiery interplays and a bit of a letdown for what these guys were known for in the past.Don't get me wrong, but the last thing to hear from such a line-up was some stabdard 80's, completely formulaic jazzy tunes blended with Latin touches and quite frequently based on pedestrian synth sounds.Where the hell re the edgy electric pianos and organ parts?The 80's have affected Sunyer & co., but this is not bad music, it's just a bit slick, recalling all these breezy and tropical period German groups.Sunyer's guitar work though is pretty excellent with plenty of light but still flawless guitar soloing and I like more the piano parts of Kitflus compared to the tasteless synthesizers.Overall the album offers a rather soft approach on Latin Fusion with laid-back tunes and careful solos, without delivering any sort of proggy vibes.''Gritos y susurros'' stands out here for Sunyer's impressive guitar executions, although the discreet funky elements are not very welcome, while ''Ball de gegants''suffers from some period keyboards, but offers some great breaks and gears throughout.
Slick Latin-spiced Fusion from a veteran Prog line-up, where the commercial tendencies and radio-friendly plays overpowered the technique, proggy themes or virtuosity elements.For fans of the style.
Posted by Zen Archer at 2:08:00 PM