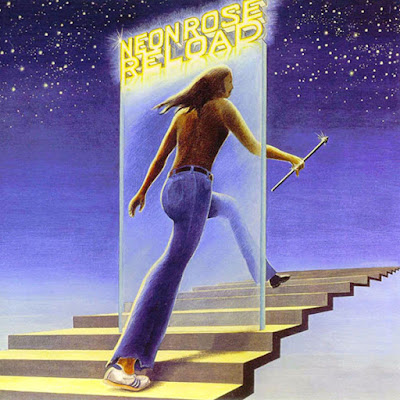 Neon Rose from Stockholm is said to have been among the first Swedish hardwear bands that sang in English. Neither were they on any shit company whatsoever but at Vertigo, the same company that gave out great things like Black Sabbath and Uriah Heep to name just a few. Three plates made the band release during the years 1974 and 1975, of which the first two were not particularly remarkable. The third album Reload on the other hand, where all the pieces had fallen into place and was very remarkable - but by then the members were apparently so furious that there were no more disc releases.

As a Thin Lizzy fan, you wonder if Phil Lynott & Co, who at that time was also on Vertigo, was inspired by a bit of Neon Rose when they did the Jailbreak album from 1976, that is, the year after Reload . Listen from 0:53 in Night Birds and then compare with Warriors around 3:15. Completely conspiratorically far-fetched, it is probably not.

There is a video recorded for Dead Eyes , automatically a good choice as the whole album is fully cast. But there are still three other tracks that stand out extraordinarily: The Race for Knowledge, A Smell of Death and the album's title track (with the wonderful base song after introt). All three songs are exemplarily arranged with their alternating hard and soft parties. Listen and enjoy the beginning of the Swedish hard rock!

Yep, I'm pretty sure this is their best as well. It's definitely the best written and most consistent album of the three. Even the tracks here that take some time to get going... actually go somewhere interesting. A4's second half has a guitar solo that smacks of late 70s Rush, complete with an oddly syncopated, aggressive bass n' drum pattern behind it. B1's another track that starts kicking ass/briefly becomes what might as well be a totally different track with its guitar solo, and it's also got a recurring riff that sounds eerily similar to the opening music in the original Doom.

A1, A3 and A5 are all great mid-70s dumb fun 'n riffs hard rock. A2's at *almost* the same proto-metal speeding train tempo as Queen's Stone Cold Crazy and Sweet's Set Me Free. And those last two tracks are fantastic, with at least one mighty riff each. B2's really the only dud, though it does feature an unaccompanied electric bass solo in its first third, which is a bit unusual. But the rest is SOLID. Dual lead guitar, cowbells, and big ol' burly riffs.