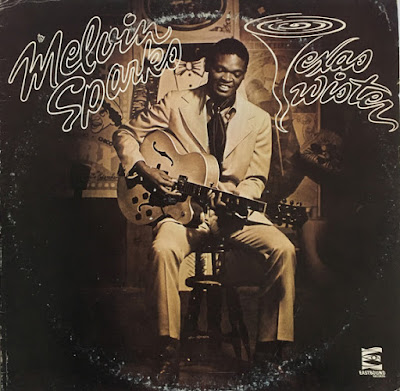 
After signing to Eastbound Records, began work on his fourth album Texas Twister with his old mentor and producer Bob Porter.  Melvin Sparks hoped that renewing his partnership with Bob Porter might kickstart his career.

For Texas Twister, Melvin Sparks wrote four new compositions Whip! Whop!, Judy’s Groove, Texas Twister and Star In The Crescent. They were joined by Bobby Graham’s Gathering Together, Billy Eckstine’s Want To Talk About You and Brian Potter and Denise Lambert’s Ain’t No Woman (Like The One I Got). These seven tracks became Melvin Sparks’ Eastbound Records’ debut Texas Twister.

No expense was spared for the recording of Texas Twister which was produced by Bob Porter and was recorded by band that featured some top musicians. The rhythm section of drummer Idris Muhammad, bassist Wilbur Bascomb and guitarists Ron Miller. They were joined by organist Caesar Frazier, Sonny Phillips on Fender Rhodes and Buddy Caldwell on bongos. A horn section that featured baritone saxophonist Ed Xiques, tenor saxophonist Ron Bridgewater and trumpeters Cecil Bridgewater and Jon Faddis was the final piece of the jigsaw. Melvin Sparks played his trusty Guild guitar on Texas Twister which was meant to be the start of a new era for him.

Despite being well received by critics, who thought Texas Twister Melvin Sparks’ finest album, it failed to find an audience when it was released later in 1973. History had repeated itself again, and Melvin Sparks who had just released his fourth album Texas Twister was still looking to make a commercial breakthrough.

Like many soul-jazz musicians, Melvin Sparks moved into funkier directions as the mid-'70s approached, whether out of pressure from marketing trends, a desire to explore that area, or both. As such efforts go, Texas Twister is a decent one, though not innovative or tremendously exciting. Working as the leader of three different configurations of musicians varying in size from a trio to a ten-piece, Sparks wrote about half of the material and took all the guitar solos, though Ron Miller also played guitar on three tracks. The cuts with the larger band tend to be the funkiest, the group playing with real pluck on "Whip! Whop!" But elsewhere, they lean toward a more straight-ahead soul-jazz direction, with "Judy's Groove" setting a nice swinging, walking beat. "Star in the Crescent" is an effortless throwback to the classic, more bop-driven '60s soul-jazz style, Sparks peeling off some fluid lightning riffs and giving plenty of space to Idris Muhammad's drums and Caesar Frazer's skittering organ. Texas Twister was combined with the 1975 LP '75 on a single-disc CD reissue.
Posted by Zen Archer at 10:32:00 PM