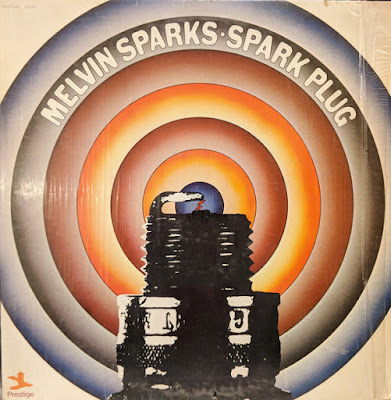 After the commercial failure of his debut album Sparks!, Melvin Sparks went away and wrote Spark Plug, Conjunction Mars and Dig Dis which would featured on his sophomore album Spark Plug. These three tracks were joined by covers of Gene Redd’s Who’s Gonna Take The Weight? and Schwartz and Dietz’s Alone Together.  The songs that became Spark Plug were recorded by many of the musicians that featured on Sparks!

Drummer Idris Muhammad, organists Leon Spencer Jr and Reggie Roberts, trumpeter Virgil Jones and tenor saxophonists Grover Washington Jr join guitarist Melvin Sparks. Taking charge of production on Spark Plug was Bob Porter, as a much more laid back, but funky album of soul-jazz took shape. This was similar to the Prestige “sound” that had evolved over the last few years under Bob Porter. Melvin Sparks was the latest purveyor of the Prestige sound.

Just like his debut album Sparks!, Sparks Plug, was well received by critics, and many thought that Melvin Sparks was one of Prestige’s rising stars. However, when Melvin Sparks released Sparks Plug later in 1971, the album wasn’t the commercial success that Prestige nor Melvin Sparks had hoped. For both parties, this was hugely disappointing.

Sparks used a similar soul-jazz approach as he had on his previous Prestige session (Sparks!), revamping the lineup to put Reggie Roberts on organ and a young Grover Washington, Jr. on tenor sax (Idris Muhammad remained behind the drums). He also introduced some compositions of his own this time around; three of the five numbers are Sparks originals. It's more relaxed, funky, occasionally bluesy jazz with guitar and organ to the fore, very much of a piece with the Prestige soul-jazz "house" sound circa 1970. Pleasant fare, although it does tend to fade into suitable background music instead of attracting attention or intense scrutiny. The entire album is available on the Legends of Acid Jazz CD reissue, which also includes everything from Sparks!.

A groovy & driving album by this exellent guitarist with organ (Reggie Roberts/Leon Spencer), sax (Grover Washington), trumpet (Virgil Jones) and Idris Muhammad on drums. The album starts with the funky tune Who's Gonna Take the Weight? by Kool & the Gang, followed by the melodious composition Spark Plug, Conjunction Mars has a nice horn accompainement, Alone Together has a cool groove & the guitar gives tribute to Grant Green and Dis Dis closes with an intense guitar / organ interaction by Melvin and Reggie.
Posted by Zen Archer at 9:38:00 PM