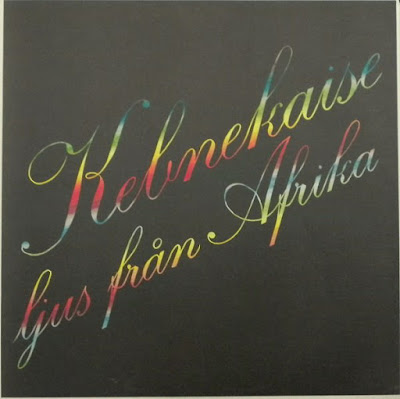 Well Paul Simon had ‘Graceland’, Manfred Mann had ‘Somewhere in Afrika’, and Osibisa had – well, pretty much their entire discography. And Kebnekaise took their own stab at an African-themed album, in this case ‘Ljus från Afrika’ which seems to wander between Saharan and Afro-Caribbean folk, with a few touches of both modern rock and what sometimes come across as mildly Celtic-sounding vocals (sung in Swedish as near as I can tell). Not that there’s a whole lot of singing though, as this is still principally an instrumental band.
I’m not going to spend a whole lot of time explaining this record; suffice it to say that it is clearly for collectors-only, as casual fans of Kebnekaise and of progressive folk in general won’t likely find this to be what they likely expect from a seventies Swedish folk band. The syncopated percussion, hand drums, chanted and layered vocals, and heavy world/ethnic feel to the music are one more example of the experimental nature of this band, but are a bit outside the norm even for a Swedish prog folk band (and I say that knowing several Swedish-language folk bands who have adopted liberal use of world sounds and instruments in their music).

The first album from these guys was a fairly straight-ahead rock offering, while their second was a collection of Latin-adapted traditional folk standards, and the third in the vein of more well-known European folk music. This time they leave the musical continent completely, except for in a few places like “Bounsé na Bounsé” where some tasty violin accents the pulsating dance rhythms quite well; or on “Tigerdance/Wind” where some spacey sound effects and heavy guitar add a different dimension (more violin here as well). The most realistic-sounding tune is “Silifé”, and even here the music could be as easily mistaken from something from Cuba or the Dominican Republic as from Saharan Africa.

And the band doesn’t completely get away from their earlier rocking sound, as evidenced mostly in the closing track “Brudarnas Parti” with its heavy guitar, fat electric bass line, and sassy brass (saxophone). This is a tune that would be just as at-home on a dance floor as it is on the band’s record album.

But for the most part this sounds a bit like Osibisa tunes played by white men, which is to say the rhythms are interesting but the overall mood seems a tad bit measured. This is not authentic African music, and like Manfred Mann’s similar attempt it shows. Unlike Mann though, these guys gave things a decent and honest effort.
Posted by Zen Archer at 2:21:00 AM