Idris Muhammad
1978
Boogie to the Top 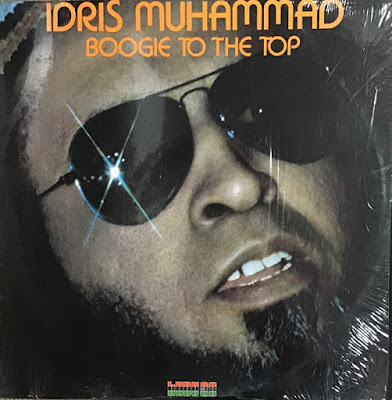 Classic middle period work from drummer Idris Muhammad – a set recorded after his initial run of lean funk recordings for the jazz scene – with a bit more soul in the mix, and definitely a bit of boogie in the groove! Arrangements are by David Matthews – the maestro of the soul-styled charts who first honed his craft with James Brown – and the approach here is tight jazz funk, with both a good ear for the clubs, and some of the more sophisticated styles that the CTI/Kudu crowd could appreciate! There's some vocals at times – sung by Frank Floyd, Ray Simpson, and others – but the instrumental component of the album definitely takes the lead - with percussion by Nicky Marrero alongside Muhammad's tight drums – plus Hiram Bullock on guitar, Cliff Carter on keyboards, David Friedman on vibes, and solos from Ray Davis on alto and Jeremy Steig on flute.

A much welcomed reissue of the 1978 Idris Muhammad gem 'Boogie To The Top'. Released a year after, arguably, Idris' most well-known anthem, 'Could Heaven Ever Be Like This' the similarities in style and composition are clear. Expertly produced, rich instrumentation, expansive drum fills, gospel tinged full-bodied vocals, all the while epic and life affirming in it's nature - what more could you want?

Young Pulse steps up on the b-side, to add his own subtle touches and tweaks to the original. Looping the guitar and echoing out the vocals whilst working in more of the synth lines. The addition of a crisp clap and extra percussion add an element more vibrancy into this mix,
Posted by Zen Archer at 3:19:00 AM