Idris Muhammad
1977
Turn This Mutha Out 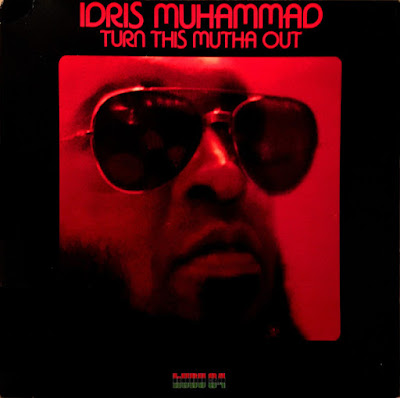 Accompanied by Hiram Bullock (guitar), Cliff Carter (keyboards), Wilber Bascomb (bass), Jeremy Steig (flute), and others, Idris Muhammad ventures into the world of pop and R&B, annoying die-hard jazz fans. Limp and uninspired vocals hurt "Could Heaven Ever Be Like This," but the track is good and could have stood alone with instrument(s) replacing the vocal parts. If you like African rhythms underneath a haunting flute, then you'll love "Camby Bolongo" -- Sue Evans supplies percussions and Randy Brecker provides a searing trumpet solo.

"Turn this Mutha Out" offers some dynamic interplay between Bascomb's funky bass vamp and Bullock's compelling guitar work. The tune landed on the R&B chart in the States and got considerable airplay in Britain. "Tasty Cakes" uses the same lineup including complementary musicians as "Mutha." "Crab Apple," aided by Michael Brecker's tenor sax, jams; the midtempo strut is nasty, particularly when Carter works his synthesizer. "Moon Hymn" is a duo tempo head tune that nods at War's "Slipping Into Darkness." Eric Gale is the guitarist on "Say What," a fusion of jazz and funk. Muhammad never solos, he didn't write any of the songs, he didn't arrange any, and he didn't produce, but that eternally funky, break-heavy drumming makes this an album only he could have recorded.

An album very hard to find, especially in good condition, This album has an incredible song "Could Heaven Ever Be Like This" (is my favorite of this album), this song is probably historically had the most crossover success with the disco audience, The song has an overall funky mid-tempo groove that tends to grow on you with each and every driving beat, the song also stands strongly is "Turn This Mutha Out" with a high burden of funky beat and guitars very well maintained. "Tasty Cakes" this is another amazing song with disco hints and funky touches. "Crab Apple" another of my favorite track, is deliciously funky-jazzy and finally the coolest part of the album "Moon Hymn" fascinating, is a song that you'll gradually enveloping and slowly ending with a horn section that is amazing.

One of the best jazz/funk/disco albums ever! The late great Idris Muhammad, Hiram Bullock, Michael Brecker, and Eric Gale all play their asses off on this legendary album. The beats, the solos and the wicked bass of Wilbur Bascomb make this a true classic. It said in the liner notes it took seven years to get this on cd. I've been waiting and checking to see if it was on cd for 25 years. Finally it's here! It's a shame we've lost these four great musicians. But we can hear them on thousands of albums for years to come.
Posted by Zen Archer at 3:03:00 AM