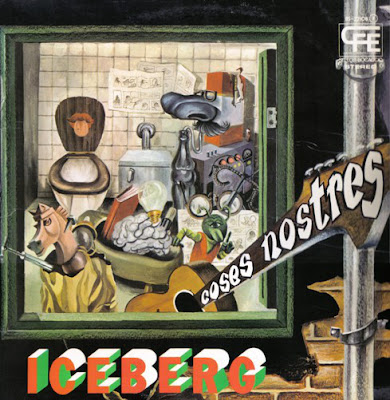 Under this Mafiosi title comes one of the better jazz rock fusion albums from Spain (at least among the few I know), the second one from this mid to late-70's Catalan band. Gone is their frontman sax and singer Angel Riba and they are down to your standard prog quartet, but this hardly seem to stop them, quite the opposite, becoming entirely instrumental.

For the most part this album seems to be lost between Maha's Inner Mounting Flame and Santana's Caravanserai with some KB coming more from Weather Report and RTF or even Jan Hammer, but this is more due to the instruments chosen than the actual playing, although some guitars are a cross of De Lucia and Di Miola on one side and McLaughlin on the other. I think this sets you with a good idea of the sound of the album, if you want more get the album, you.....proghead! ;-)

The first side is really awesome in musical execution with some particularly astounding moments where you'd swear Nova (as well as its prelude) should be on Inner Mounting Flame or on Cobham's Spectrum, simply because the playing and writing are of the same quality. Acustica, as its names suggest, is much calmer and tamer (but valid only for the guitar since there are synths halfway through) although the incredibly high quality is maintained and the subtle flamenco and Catalan influences appear towards the very end. The remark that my colleague reviewer makes about the sound quality is unfortunately correct, although the first side of the record is relatively spared.

Kitflus brings us back to the Mahavishnu world and the second track and only congas are missing to take us into the Sahara Caravans of Santana. Flamenca Electrica is an aptly named track but is only taking the usual formula and adding some Andalusian feeling to it. Unfortunately, this is where the bad vinyl transfer to Cd gets irritating about the synth layers (and it gets worse in the following tracks). I assume this last comment because I cannot possibly conceived this was recorded so on the master tape and therefore think that they worked from vinyl. The last track is... you guessed it in 11/8 (which does not mean it was recorded on August 11, you wisearses).

Since this record only exist in CD form under this version, I knock off almost one star because of the inexcusable sound problems, which unfortunately does ruin the enjoyment of an otherwise superb record. Sounds a bit severe? Check it out for yourselves if you do not believe me!!! As soon as I find the vinyl or a re-issue, I will jump on it.

This excellent Spanish four piece band delivers outstanding, very melodic instrumental music in the realm of the jazzrock along some fusion. You will be carried away by the seven dynamic compositions with lots of interesting musical ideas: fiery guitar, swinging bass, subtle Fender Rhodes electric piano and sensational Minimoog flights in Preludi I Record, a strong Andalusian undertone, captivating shifting moods and spectacular wah-wah guitar and dazzling Minimoog runs in Nova, John McLaughlin inspired acoustic guitar and swinging jazzy piano in L'Acustica, flashy synthesizer flights, fiery electric guitar in the songs and an amazing rhythm-section in the songs La D'En Kitflus and 11-8 and an exciting pitchbend- driven Minimoog solo in the mellow A Valencia. My highlight is the song La Flamenca Electrica (Prog Andaluz!): first soaring keyboards and strong clavinet runs, then a swinging rhythm with strong Andalusian undertones featuring spectacular work on guitar and keyboards. If you like jazzrock, this band should be yours!
Posted by Zen Archer at 12:56:00 AM