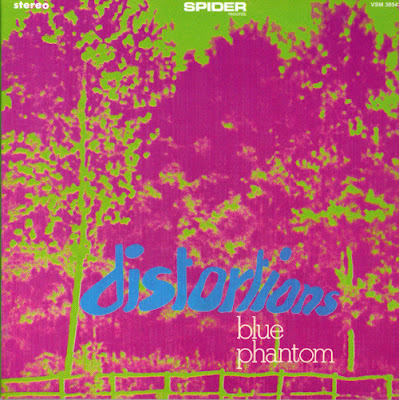 Heh, why has H. Tical (aka Armando Sciascia - a renowned Italian "sexy film" composer) produced such a seriously heavy stuff?
A interesting album indeed, recorded by BLUE PHANTOM, a secret anonymous project with very little information around them. But at the same time, we can understand why psychedelic progressive rock fans can be immersed in this obscure album. Listen to the first track "Diodo" and we can feel something of sinkable depth with a bunch of heavy riffs by rigid bass & drums and an exploded guitar solo, plus quirky, weird keyboard sounds. What a cunningly worked-out musical trap by H. Tical. Also "Metamorphosis" is not simply a bluesy, tragic but a perversely vertiginous song. Unchanged sarcastic keyboard sounds and noises around us. Delightful drumming and cool melodies can be impressive in the following hollow-chaotic track "Microchaos" or the first magma of B-side "Dipnoi". "Compression" has some bubbled guitar, keyboard sounds and heavy progressive elements. "Equilibrium" is characterized with sentimental, unrefined keyboard chandeliers upon extreme noise terror by warping bass playing. Terrifically violent "Violence", with a tragic guitar solo around over. A short but pure psychedelic ballad is the next "Equivalence" in a dark shower of dark guitars, bass, drums ... contrary to "Distillation", a heavy heavy hero song by the (maybe) same instruments. The last "Psycho-Nebulous" is slightly artificial man-made machinery one but enough to spread Tical's powerful catecholamine.

High volume guitar, acid organ and a riff that reminds clearly to Iron Butterfly. This is how this album welcomes you. It's a project of Armando Sciascia that was used to write B-movies soundtracks. Diodo has something of the spy-movie, but the organ sounds as it was played by Rick Wright in the 60s.
All the tracks are heavy and jazz-oriented, still good for a thriller movie if you want, but images are not necessary. The pity is that all are limited to 3 or 4 minutes maximum so they have to fade out.

The level is good throughout all the album, including the sound quality. Highlights are tracks like "Compression" (very Floydian), the hard-rock of "Dipnoi", the clues od Syd Barrett on "Distillation" and the most acid track of the album, "Psycho-Nebulous".

Being good for soundtracks means that all the music is evocative of dark or weird situations. Not scary but "alerting".

Not an absolute masterpiece of the genre but a really good album that's one of the few existing documents of Italian psychedelia of early 70s. A period dominated in Italy by the Dylan-folk songs of singers-songwriters and the beginnings of RPI.

There is the strangest mishmash here, but what it really comes down to speaking about is a blend of psychedelic rock and library music. This sounds so clinical, so let me put it another way. There is a heartwrenching slab of newer animation called Mary and Max that I watched with a girl as one of our first Netflix boyfriend-and-girlfriend sessions (because is this not something that dating is all about as a young adult in the 2010s?). We both cried, or I hid my eyes while she cried, or put it onto my agenda to purge later and then let it get stuck in my queue for about a year too long. Anyway, there's a part where Mary has lost Max's trust as an adult woman and she's standing in her home with a bottle. She's drinking, she's grasping at love, she's falling over, and by the end of the movie, something has happened that makes the scene feel like it was completely necessary for us to see, but completely pointless for her to have to feel. That's how I feel every time I drink alcohol, and it's the haze of danger that I feel Distortions wants to have lauding my brain into pouring that third shot at 7AM.

That all implies that Blue Phantom is sad music. Not one bit, but the music that played in that scene from Mary and Max was not unlike the ouzo-stained bathroom in "Compression", the modern car alarm sample that's somehow temporally displaced itself in "Violence", the Scooby Doo, 'we're going to catch you and chase you, but what will we actually do to you if we corner you' faux-danger that the 1960s was just starting to piece together. This feels like a period piece amongst music like it, and I don't know that I disapprove. By that, I mean it's a refreshing thing to see a 1971 album that doesn't want me overthinking it like Tago Mago, underthinking it like What's Going On and There's a Riot Going On, or left out of my mind with the grief that's image-instilled as Songs of Love and Hate would have me do. This is a record that seems to just be there, but not atypically or insignificantly. I love it when I'm reminded of this one's existence. Go to an actual library and watch that movie, then go home and put this on. Maybe you can rent the vinyl still from your county's coffers.
Posted by Zen Archer at 3:05:00 AM