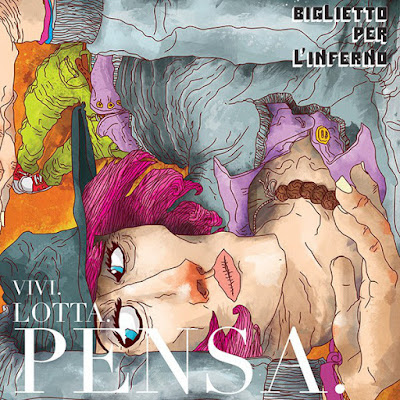 After a long hiatus, in 2007 il Biglietto per l'Inferno came back to life on the initiative of two founder members, Giuseppe "Pilly" Cossa and Mauro Gnecchi. With a renewed line up, the band started performing live the old repertoire from the seventies and in 2009 released a new studio album entitled Tra l'assurdo e la ragione (Between absurd and reason) featuring new arrangements of the historic pieces along with two new tracks. In 2015 il Biglietto per l'Inferno carried out this process of re-appropriation and reworking of their past by releasing a new studio album, Vivi. Lotta. Pensa. that in some way completes the work started with the previous one. It was released with a beautiful packaging on the AMS/BTF label and a three folds jacket with an art work by graphic artist Marco Menaballi that tries to depict its musical and lyrical content...
The current line up features Giuseppe "Pilly" Cossa (piano, keyboards, accordion, melodeon), Mauro Gnecchi (drums, percussion), Mariolina Sala (vocals), Ranieri "Ragno" Fumagalli (hornpipe, recorder, ocarina), Enrico Fagnoni (upright bass, electric and acoustic bass, acoustic guitar), Renata Tomasella (piffero, recorders, ocarina), Carlo Redi (violin, mandolin, acoustic guitar) and Pier Panzeri (electric and acoustic guitar). Along the years, old and new members have matured and incredible cohesion creating an amazing wall of sound where ethnic and folk elements are perfectly mixed with progressive rock while the new female vocalist should not be considered just a replacement for the original front man since Mariolina Sala is not just a singer but also an actress and a sensitive interpreter able to convey emotions with her enthralling theatrical approach...

This new album starts by the joyful notes of the title track, "Vivi. Lotta. Pensa." (Live. Struggle. Think.). It's the new arrangement of a piece contained on the second album of the band, Il tempo della semina, a committed track about freedom, equality and solidarity that sounds still actual and crisp, between globalization issues and new revolutionary winds blowing all around the world.

Next comes a brand new track, "Narciso e Boccadoro" (Narcissus and Goldmund). It's a delicate, dreamy ballad inspired by the 1930 novel of the same name by Swiss writer Hermann Hesse, also published as Death and the Lover. The novel tells the story of Goldmund, a young man who wanders around aimlessly throughout Medieval Germany after leaving a Catholic monastery school in search of what could be described as "the meaning of life", or rather, meaning for his life (quote from wikipedia). Here the ethereal interpretation by Mariolina Sala evokes the last words of the protagonist before passing away and the souvenir of his old friend Narcissus...

The following "La canzone del padre" (The father's song) is a long, complex track that was originally released on Biglietto per l'Inferno's second album. It's about the generation gap and tells the story of a difficult relationship between a father and his son. Eventually the rebellious son grows up and becomes a popular pop singer but there's no way to heal that broken relationship. The band really breathed a new life into this piece with a sparking arrangement and a passionate interpretation...

"Mente Solamente" (Mind, lonely mind, nothing but mind) is another piece from the second album that here is completely reinvented blending psychedelic elements and joyful folksy passages. It's an almost instrumental track that invites to let your thoughts run free for a while on the steps of a strange dance...

The long epic "L'amico suicida" (A suicidal friend) closes the album. It was originally released on the eponymous 1974 debut work and was written in memory of an old comrade-in-arms of Claudio Canali who took his life during the military service. This is another great interpretation able to stir emotions with renewed energies...

On the whole, this is a really good album that is absolutely worth listening to.
Posted by Zen Archer at 2:33:00 AM