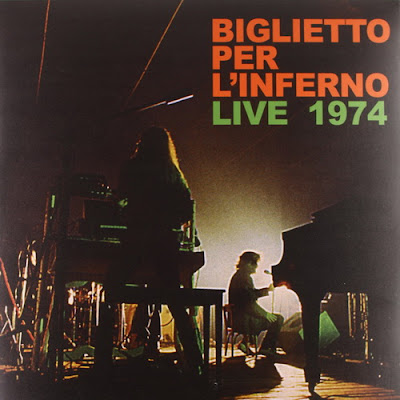 Recorde live in Lecco on May 9, 1974 during the tour with UFO


For fans of RPI live albums are somewhat rare. As most with even a passing knowledge of RPI know.. there were scores and scores of 'one-shot' groups that released high quality, interesting music and albums then... poof.... disapeared like a fart in the wind. Biglietto Per L'Inferno's self titled debut album has been a favorite since the day I got my hands of it. I had heard of a live album by Biglietto Per L'Inferno but just hadn't got around to getting it. Enter that very special person in my life, who in addtion to her vast musical knowledge, is equally thoughtful and generous. She got me the album on the occasion of one of our vacations together in the mountains of North Carolina. I was taken with it immediately.
The sound quality is not the greatest. .but we are talking about a genuine live PRI album so a great deal is forgiven. While the warts of an imperfect recording are easy to notice.. they are more than offset by the fire and passion of the group and the music. Claudio Canali's voice just drips with passion and heart wrenching feeling. The songs are almost exclusively from their first album, with the lead off track Il tempo della semina being the exception, being from what would be their album of the same name, which wasn't released for 20 odd years. That's another review though.

The individual songs I've covered in previous reviews. The songs follow the same arrangements for the most part as the studio album and between the warts of the recording and/or limitations of the live format some memorable moments such as the staggering intro to L'amico suicida are lost or not accented as heavy.

A great live document.. without the spit and polish of recording that while sounding great lack the fire and energy of a recording that just ....sounds live.. without needing crowd noise added. For me.. as much as I love live albums..I do prefer the studio versions but there is a fire in these recordings that is worth hearing if a fan of Biglietto Per L'Inferno.
Posted by Zen Archer at 2:13:00 AM