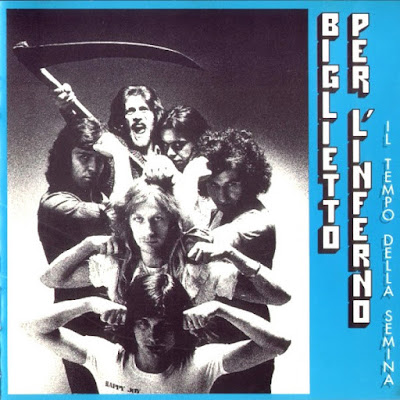 Sophomore, last and posthumous album by Biglietto per l'Inferno, one of the undisputed masters of the heavier side of 70s Italian symphonic prog, "Il Tempo della Semina" never met its proper vinyl edition at the time. All in all, it happens to be one of those lost progressive rock gems that shouldn't be missed in a good collection. Definitely, the band remains loyal to its roots, formed by a combination of rocking dynamics, creative use of double keyboards by two stylistically different players, an important presence of Canali's vocal deliveries and a tight ordainment of the rhythm duo's foundations. All these are fueled into a harmonizing structure that feels even more robust than on the debut album, a stunning debut indeed. The level of compositional genius and the dose of dramatic musicality may not be as impressive as on the debut album, but you can tell that the arrangements and sonic interconnections among musicians are more accomplished, that is, they reveal a wider range of elaboration. It is such a pity that the sound production is not really in touch with this improved framework, but luckily we've recently got remastered editions of both albums, so this technical flaw does not feel as overwhelming. The original CD was taken from a presumably lost tape, and now we've got a new edition with a modified tracklist. Anyway, I'll comment on the first CD edition. The opener is the majestic 10 minute long namesake track, which follows a set of instrumental deliveries fluidly going through the various motifs: the flow is properly on clever links between sections that are alternately romantic, pompous, syncopated and almost spacey. The whole sung part is actually a soliloquy that trends somewhere between the ceremonious and the humorous, followed by a final instrumental section (Tull-meets-BMS). Once the fade-out end, the listener is left wanting more, and so the record continues. 'Mente Sola - Mente' is a playful theatrical interlude that mixes a circus mood with a mechanical vibrato (not unlike the closing track of BMS' "Darwin"). It is a funny little piece in which the sense of humor provides a light approach to the relevant issues of free thinking and the value of the individual mind. 'Vivi Lotta Pensa' states a very vibrant example of progressive complexity cleverly mixed with the power of rock: it isn't too long but it is well crafted in artsy terms. The same goes for 'L'Arte Sublime di un Giusto Reinare', which brings a Tullian feel to the band's signature approach to uptempo compositions. Believe me, these tracks are so catchy and, at the same time, so true to the spirit of symphonic rock, that perhaps they would have benefited from a longer expansion (a total of 4 or 5 minutes) in order to comply with their potential magnificence. Elaboration and expansion are not problems for the last two pieces. 'Solo Ma Vivo' starts with a slow, introspective section that sounds quite related to the more relaxed moments of the debut album; the final section erupts with power and intensity, with the guitar riffing and the tight drumming leading the way for the other instruments, while Canali sings the closing words. 'La Canzone del Padre' bears a more diverse structure (with featured presence of organ layers and fuzzed bass), less dramatic than the preceding song, with more room for playful passages. I agree with other fellow reviewers that the song lacks the sense of unity that prevailed in the namesake opener and in 'Solo Ma Vivo', but it is a great song anyway, and it makes an effective closure. Great, awesome, colorful - synonyms for Biglietto per l'Inferno and accurate descriptions for this particular album.