Berndt Egerbladh and his Quartet
1966
They All Laughed When I Sat Down at the Piano... But, When I Started to Play! 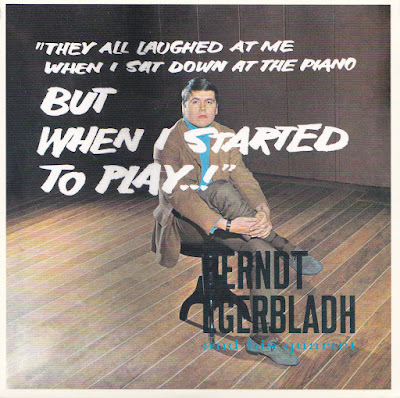 After 1962 having introduced themselves to the album Fanfar! with Lasse Lystedt's quintet and then slate debuted in his own name with his own trio on the album Schizo, the 34-year-old teacher and pianist Berndt Egerbladh (1932 - 2004) stepped into the studio a couple of years later to record with this quartet this album as was originally published in 1966 on the Swedish record label Nashville.

The least long album title was an easy rewriting of John Caple's classic advertising slogan from 1926, and the album has previously been reissued both at Cupol (1969) and at the American Jazzhus Disk (2013).

With Lars Westin as a producer, the album is reissued now, expanded with three alternative recordings, which means that the playing time has increased from just over 40 minutes to over an hour - even if the bonus tracks are not essentially different from the original songs.

It is a very entertaining record with a spiritual and nice swinging jazz where the seven original compositions balance nicely between the modal and hardbop with splashes of improvisation. The bassist Lars-Gunnar Gunnarsson and the drummer Sten Öberg are an excellent rhythm pair, but it is above all the outspoken alto saxophonist Lars Göran Ulander and the chapel master himself who shines with his presence here.

Egerbladh is in his most loose way in the title track, which is also a solo song, while he in the ballad Sunday Morning shows a test of the lyrical incarnation he later made to his primary brand. Most marvelous, however, both he and the quartet in the album's two best songs; the melancholic Estremadura (which is also available as a bonus track) and the firefighting Free Hands.