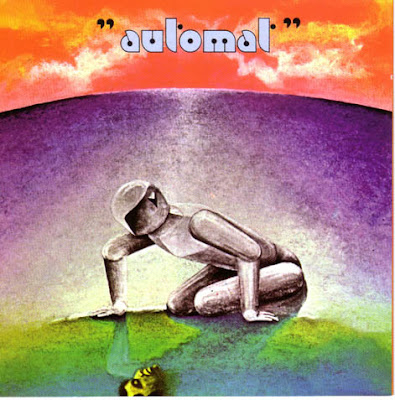 Claudio GIZZI (Aka Jean-Pierre Posit, born 16/05/1946) career is obviously recognised for eloquent neo-classical compositions used as soundtrack (mainly in horror and B movies like "Flesh for Frankenstein" / "Blood for Dracula", "Quoi?"). Back in 1978 he launched a curious & innovative musical project with Romano Musumarra and Marrio Maggi. Called Automat and only known for one publication, this little project can be considered as a reminiscence of Kraftwerk minimal but powerfully effective electronics. The music is entirely built around the MCS70 synthesiser and progammings. Automat is more into rhythmical electronic territories than into cinematic, textural ambient fields. An interesting musical document for collectors.

I first discovered Claudio Gizzi in his few precious collaborations for movie scores. This is a strong classical based musician. In this project he is accompanied by Romano Musmarra & Claudio Gizzi & Mario Maggi to provide more substantial materials. Published in 1978, this automat self title and unique album can be seen as a classic of late 70's avant garde electro pop music. This is a superb listening brillantly alternating unearthly loopy electronic ambiences with amazing retro-synth pop melodies. This work is not so far from Wolfgang Riechmann, Kraftwerk and early Colin Potter's successes in post-modern cold electro. This album doesn't have the soulful-colourful grandeur of others 70's synthscapes from Italy (Francesco Leprino, Futuro Antico, Telaio Magnetico...) but it remains absolutely original, perfectly achieved and well orchestrated. Side A culminates the album with a gorgeous sci-fi & enigmatic epic dominated by electronic scintillations, surreal themes and hyper catchy-hypno rythms / melodies. The ambience is dynamic, energetic but also admits obscure, dark, haunted vibes that remin me Goblin's 70s horror soundtracks. Droid reiterates this Goblin-esque feeling (notably in Phenomena) with tremendous, urgent rythms, scarily (a little bit cheesy) synthezised melodies. Ultraviolet features suspensful, long droning sequences in a rather icy, moody atmosphere. A mysterious, scary, cheesy and proggy electronic album that clearly deserves a listening.

The album Automat produced in 1977 and released in 1978 by italian duo Romano Musumarra and Claudio Gizzi, aka Automat. Released by EMI Italia. What is more curious about this album is that all the sounds in the album were produced using an MCS70, a synthesizer that was only one time produced. Automat is recognised for having played this synthesizer and produced the album with the same name.

The MCS70 was a monophonic synthesizer designed, built and programmed by Italian engineer Mario Maggi. Automat was Mussumara’s initiative , after learning about the instrument and proposing it to EMI Italia, through Harvest Records.  Claudio Gizzi was added to the project from EMI, for being a more experienced composer. Side A is attributed to Claudio and side B to Romano. SIde A sounds more ambient, side B sounds more epic and dancing. In total there are 6 tracks with around 5 minutes each. In total they had only 4 weeks in the studio, being the last track, Mecadence, incomplete.

Both composers used the 64 presets in the synthesizer, provided by Mario Maggi himself. The only requirement is that only the MCS70 was used to create the album.  Though a total failure by the time it was released, that didn’t leave both composers satisfied, the album is nowadays well respected by critics. Jean Michel Jarre was the first one to get a copy of the album. While Automat was being produced, Jarre released his Oxygene, album.