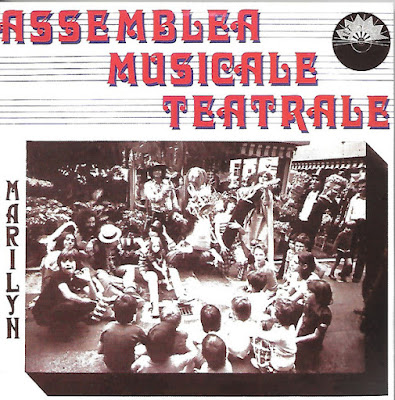 "Marilyn" is a song with a particular meaning: it was the favorite song of a friend of mine who died recently and I can't not think to him speaking of it. I have never liked this song much, honestly. The lyrics about the star system which should have lead Norma Jean to death appear moralistic, I don't like how it's sung by Lilli Ladeluca who wasn't a bad singer, but I don't think her voice fits well with this song and, last but not least, in the last chorus they've had to add a beat to fit into a metric horror. The wooden flute sounds ridicously hippy while a harmonica would have probably brought a bit of blues into this forgettable country ballad. Have I been harsh enough? Well, not all the album is so weak luckily. It has its good moments.

"America"starts like a country-rock ballad but the classical guitar gives it a RPI flavor. Also the pauses and the possible mistake of the guitarist before the first chorus don't sound bad. The bongos sounds even kraut, the keyboard bass and drums are added and this country ballad becomes a prog song. Alloisio's voice is excellent as usual and the lyrics about the American way of life referred to the cold war and all the bads in the actual foreign politics, but also with mentions to good people like saying "we hate your government but we love your people" which was a quite common position within the actual left-winged Italians. America was sometimes an enemy but sometimes a promised land.

"Gli Indiani" (The Indians) seems to indicate that initially this was conceived as a concept album about USA, as it's the third consecutive song with an "American" subject. Musically this song is more similar to the debut album, surely more progressive. It reminds a bit to a song from an Italian singer-songwriter of the same period, Francesco De Gregori and his "Bufalo Bill". Similar also in the subject.

"Tutto e' spettacolo" is a swing song, with very funny lyrics totally out-of-topic. No more America. It's about the end of the "revolutionary" age and anticipates what the 80s will be. Prophetic.

"Le Condoglianze" (The Condolences) is about the same arguments of the previous song, but it's not aggressive. It's a melodic song with some nasty moments like when they sing "If you are a German who comes to the sea, think to how many Meinhof's you will let be killed" Ulrike Meinhof was a German terrorist, founder of the "Rote Armee Frakton" who was found dead in jail, but likely killed as it happened to her mate Andreas Baderand other belongers to that group, all officially suicided. Howes ver this is just a reference and not the song's subject which is about ancients retired, football supporters and many other characters of the time.

"La Citta' Futura" (The Future City) was a common concept in the actual communist area. It was also the name of a radio still active today (which also transmits a lot of prog). It's mimic of a brass band with ironic lyrics. "If the future city will be made of waste, give a pill to all the family. For the little sister dioxyne is ready and with heroin she will achieve the peace" This is more or less what the lyrics say.

"Festa" (Celebration) is about the "Festa dell'Unita'", an annual celebration organized every year by the Communist party to raise money for the party which was in Italy a counterpart to the religious celebrations and with almost the same contents with people eating sausages, playing games, making music and sometimes listening to a meeting of a politician. Not very different from the celebrations in any little country town around the world. Of course they make a bit of sarcasm about the normal absence of political contents. Today, what was the communist party is now called Democratic Party and includes catholics and other kind of person very far from communism but the name of that celebration has remained the same.

"Carlo Marx" whose name is "Italianized" is a slow blues and it's not really about Marx. Carlo Marx is the nickname of some Carlo arrested by police. "When they arrested Carlo we played a concert to free him". I don't think this Carlo ever existed, it's just a metaphor. Other than the blues the song has some more jazzy moments and I think can have some appeal for RPI fans. Musically is the most interesting song which also features a nice guitar riff.

"Ribellarsi e' giusto"(Rebel Is Right) is a Mao Zedong's famous sentence. The instrumental opening sounds a bit Californian psych with bongos, harmonica and 12 strings guitar. It has also a funky bass riff and it's so good that I have had to pay attention to the lyrics as I'm more concentrated on the music. One of the best musical performances of this band which is usually more concentrated on the words. If Marilyn is for me a 1-star song, this is at least a 4-stars. Excellent song.

"Amica Dolce Amico Caro" (sweet friend, dear friend - in Italian amica is female and amico is male) is a piano based sad song, still about the everyday ambush of politicized people going to face the 80s, with many references to Chile and Pinochet.

"I ricchi"(The rich men) starts with some chattering in studio and the voice of Francesco Guccini can be clearly recognized. It's just a joke with very funny lyrics still strongly politically oriented about bourgeoises. It has no sense if you don't understand Italian.

Even if it has good moments and an excellent song, appreciating it can be hard even for RPI fans. I have some personal feelings with this album and I would never skip Marilyn even if I dislike it but it has to do with my youthness, not with music. I think this is no more than a collector's item. I think it has been re-released on CD anyway.